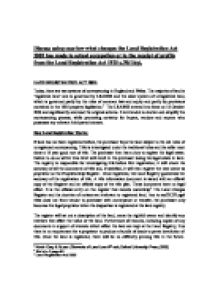 Discuss using case law what changes the Land Registration Act 2002 has made to actual occupation or to the receipt of profits from the Land Registration Act 1925 s.70(1)(g). LAND REGISTRATION ACT 2002: Today, there are two systems of conveyancing in England and Wales. The majority of land is 'registered land' and is governed by LRA2002 and the older system of unregistered land, which is governed partly by the rules of common law and equity and partly by provisions contained in the 1925 property legislation.1 The LRA2002 entered into force on 13 October 2003 and significantly amended the original scheme. It is intended to shorten and simplify the conveyancing process, while promoting certainty for buyers, vendors and anyone who possesses any relevant third-party interests. How Land Registration Works: If land has not been registered before, the purchaser buys the land subject to the old rules of unregistered conveyancing. Title is investigated under the traditional rules and the seller must show a 15 year good root of title. The purchaser then has a duty to register his legal estate. Failure to do so within time limit will result in the purchaser losing his legal estate in land. The registry is responsible for investigating title before first registration; it will check the accuracy of all the documents of title and, if satisfied, it will then register the new owner as proprietor on the Proprietorship Register. ...read more.

The Curtain Principle - To maintain simplicity in respect of the legal title, Trusts are not set out on the register9. They are entered as a restriction so that a purchaser knows that the proceeds of sale must be paid to at least two named trustees to ensure overreaching the equitable interests under the rust.10The Insurance Principle - The accuracy of the registered is guaranteed by the State, and an indemnity may be available to injured parties.11 Interests of persons in actual occupation: The system of registration of title is to ensure that the purchaser is able to see the exact state of the title of the land he is buying. An accurate register of title will show the purchaser what rights and encumbrances attach to the land. However there remain some rights which are non discoverable by searching the register. They are called interests that override. This is potentially very dangerous for purchasers because unwittingly they may find that the land is bound by some rights which effect their enjoyment to such an extent that they would never have contemplated purchasing the land if they had known about it. So, overriding interests are interests which are binding on the registered proprietor despite not being on the register. Many of the overriding interests (originally contained in s. ...read more.

In addition, their existence means that absolute title cannot be absolute. Observably, the fact that third-party rights can exist, which cannot be readily discovered by referring to the register, severely undermines the complete picture approach advocated by the "Consultative Document". PROTECTED INTERESTS: Under the 2002 Act there are now only two methods of protection for registered incumbrances i.e. the notice and the restriction. Under s.3221the notice can either be entered with the consent of the registered proprietor or unilaterally. If it is the latter, the registered proprietor can object and the Registrar decides the validity of the claim. Entry on the register does not mean that the interest is recognised by the law as valid; it simply means that it has priority over other interests according to s. 32(3) LRA2002. Certain interests cannot be protected by the entry of the notice example could be lessees for less than 3 years. By a restriction: section44(1)22 provides that where two or more persons are registered as proprietors, a restriction must be entered to ensure that interests capable of being overreached, in fact, are overreached. this applies where the beneficial interests is held under a tenancy in common as the beneficial interest is held in separate shares, but not where it is held under a joint tenancy where the beneficial interest will vest in the surviving joint tenant. Conclusion: Overall, the LRA 2002 improves upon the unregistered system of land by attempting to balance the rights of purchasers with those holding third-party interests. ...read more.