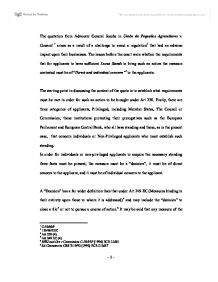 The quotation from Advocate General Jacobs in Uni�n de Peque�os Agricultores v. Council 1 arises as a result of a challenge to annul a regulation2 that had an adverse impact upon their businesses. The issues before the court were whether the requirements that for applicants to have sufficient Locus Standi to bring such an action the measure contested must be of "Direct and individual concern"3 to the applicants. The starting point in discussing the context of the quote is to establish what requirements must be met in order for such an action to be brought under Art 230. Firstly, there are three categories of applicants, Privileged, including Member States, The Council or Commission; those institutions protecting their prerogatives such as the European Parliament and European Central Bank, who all have standing and those, as in the present case, that concern individuals or Non-Privileged applicants who must establish such standing. In order for individuals or non-privileged applicants to acquire the necessary standing three facts must be present; the measure must be a "decision", it must be of direct concern to the applicant, and it must be of individual concern to the applicant. ...read more.

as the applicant. This is in stark contrast to the decision of the court in Eridania 22 where it held: "The mere fact that a measure may exercise an influence on the competitive relationships existing on the market in question cannot suffice to allow any trader in any competitive relationship whatever with the addressee of the measure to be regarded as directly and individually concerned by that measure" The reasons for the decision in Extramet are obscure, and have been criticised for being so 23 but one reason given is that the court was only too aware that the decision may have been challenged indirectly under Art 23424 or that Anti-Dumping cases were somehow "different"25 What then is the significance of Art 234 in determining the standing of applicants? Under the article the National courts are able to refer a question to the ECJ for a preliminary ruling on such issues as the interpretation of a Treaty or validity or interpretation of acts of the institutions. Necessarily, before the court may request such a ruling, it must have a case before it and herein lies the problem as enunciated by Advocate General Jacobs in Uni�n de Peque�os Agricultores v. ...read more.