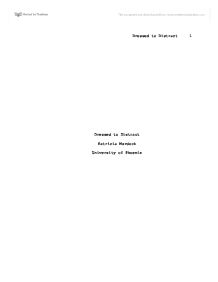 Dressed to Distract 1 Dressed to Distract Patricia Murdock University of Phoenix Dressed to Distract 2 A 33-year-old single Mother, Debrahlee Lorenzana, filed suit against Citigroup, claiming that she was dismissed from the Citibank branch at the Chrysler Center for looking to provocative. As a result of the shape of her figure, Ms. Lorenzana was advised that her clothing, made it "too distracting" for her male colleagues and supervisors to bear. An article in the Village Voice described Ms. Lorenzana as a five-foot-six, 125 pound, Latin beauty with soft eyes, and flawless bronzed skin. Since the allegations, Ms. Lorenzana has also been publicly ridiculed as being referred to as having, a Jessica Simpson rack, J.Lo's curves, and Audrey Hepburn's elegance. TV and tabloids have published pictures of her wearing pencil skirts, turtlenecks, tailored jackets, and stiletto heals, all which have been blamed for the distraction of her male bosses and colleagues. ...read more.

These may also lead to an employee fearing for their own personal safety. In conclusion, I do believe Ms. Lorenzana was a bit reckless in her choice off clothing, and although the actions of her male bosses and colleagues was unacceptable and inappropriate, she had a responsibility to "herself" to project a more business like appearance by possibly rethinking her wardrobe and how others may view her as a professional. Companies still need to take sexual harassment seriously. They need to keep tabs on their management by holding regular meetings, unscheduled visits, and by having more sexual harassment training. I believe it would also be a good idea for upper management to have scheduled employee meetings on issues such as sexual harassment. They also need to respond promptly to any accusations concerning sexual harassment as a delay in doing so may give the accused reason to believe that what they're doing is acceptable and are in no danger of getting caught. Preventing sexual harassment in the workplace can save in thousands of legal fees and increase employee productivity. ...read more.