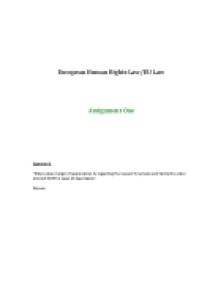 ECHR Article 8: Where does margin of appreciation lie regarding the respect for private and family life under Article 8 ECHR in cases of deportation

﻿European Human Rights Law/EU Law Assignment One Question 1 ?Where does margin of appreciation lie regarding the respect for private and family life under Article 8 ECHR in cases of deportation?. Discuss. ________________ Question 1: Article 8 of the European Convention on Human Rights aims to protect the individual against arbitrary interference in his or her private or family life. It is a qualified right, so that there is the possibility for state interference and states certainly have some discretion when applying the Article, thus, there is a certain ?margin of appreciation? given to member states. The following essay will explore the extent of the margin of appreciation in relation to Article 8 in deportation cases. The first part of the essay will give consideration to the margin of appreciation doctrine in general, as this plays a crucial role in the interpretation of all of the Convention rights. The second part of the essay will then explore the evolution of Article 8 case law in the field of deportation. Here, a particular focus will be on deportation cases of long-term immigrants, so called ?virtual nationals?. Lastly, the current position of case law on this issue will be examined and propositions for reform, which would narrow the margin or appreciation, will be put forward. The margin of appreciation is a doctrine that plays a crucial role in the interpretation of the European Convention on Human Rights (ECHR). It refers to the amount of discretion the Court gives to national authorities when it takes legislative, administrative, or judicial action in the area of a Convention right. ...read more.

However, Article 8 deportation cases, particularly earlier ones, are often criticised for their lack of predictability and some say that the outcome of cases was ?somewhat of a lottery[18]?. To illustrate this unpredictability, one can look at two similar cases from the 1990s. In Boughanemi v France[19], no violation or Article 8 was found on grounds of the expulsion of a Tunisian national who had lived in France for 20 years since the age of eight, but had been sentenced to less than four year?s imprisonment. Contrastingly, in Beldjoudi v France[20], the Court found that the expulsion of an Algerian national who had been born in France but had been sentenced to a total of ten years imprisonment for a range of offences, was a violation of Article 8. The case-by case approach by the Court already received criticism in the 1990s, particularly from ECtHR judges, such as Judge Martens who expressed that this case-by-case approach was ?a source of embarrassment for the Court?[21]. A significant step in development of Article 8 deportation cases was the Courts judgment in Boultif v Switzerland[22] which sets out relevant criteria which need to be considered when assessing the likelihood that a decision will interfere with family life and if so, its proportionality to its legitimate aim. One should note here, that only the first two criteria, namely the nature and seriousness of the offence and the time elapsed since the commission of the offence and the applicant?s conduct since the offence, reflect the State?s interest in protecting society, whereas all remaining criteria attempt to measure the impact an expulsion order would have on the immigrant and his family. ...read more.