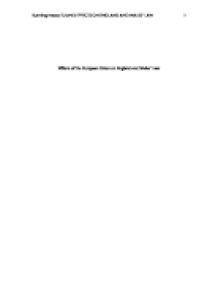 Effects of the European Union on England and Wales Law

Recently, the British government has drafted legislation to ensure that in future, parliament and the British citizens will have a say on any proposed transfer of powers from the United Kingdom to the European Union (Foreign & Commonwealth Office, 2010). The main aim of this legislation is to increase democratic and parliament control, scrutiny and accountability over European Union decision making. This legislation also means that any proposed future transfer of areas of power from the United Kingdom to the European Union will be subjected to a referendum. This is seen as a way through which the British government tries to control its activities in the European Union and subsequently retrieve the ceded power. The public support of the involvement of the United kingdom in the European Union activities has fallen over the last decade and this is seen as a way through which the government is willing to allow the public and its parliament to have the pivotal control over their country's involvement in European activities. The European community law is an integral part of the law of England and Wales. European laws go hand in hand with the English and Wales law in many different situations such as employment rules, commercial activity, consumer rights and the protection of the environment. ...read more.

This scheme has enabled workers to retain membership of the United Kingdom state scheme even though they are working in another member state. Several attempts have been made to calculate the impact on domestic laws of European Union requirements (European Movement, 2009). In comparison with other member states, the view that most of the laws in Britain are a result of the influence of the legislation of the European Union is considered to be true. Due to the direct effect of the EU legislation on the member state, there is no need for any member state to enact any legislation that would bring them into effect. For this reason, a Member State is required by the treaty to fully apply the law and that it does not need any form of national legislation for it to be fully effective in any Member State. This means that they impose obligation to the national citizens to the same extent as national law. Many political leaders in their respective member countries have claimed that most of their legislature originated from the European Union legislation. For instance, the then British Prime minister, Tony Blair, in his 2004 speech to the CBI claimed that half of all major new regulation comes from the European Union. The then Chancellor of the Exchequer, Gordon Brown, claimed in his pre-budget report that half of all the regulations originated from the European Union. ...read more.