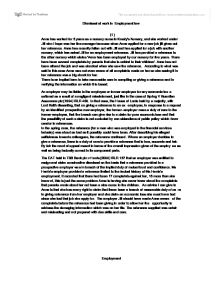 (1) Anne has worked for 5 years as a nursery nurse in Krusty's Nursery, and she worked under Jill who I hope was her line manager because when Anne applied for a new job jill gives out her reference. Anne has recently fallen out with Jill and has applied for a job with another nursery, which has asked Jill for an employment reference. Jill has provided a reference to the other nursery which states 'Anne has been employed by our nursery for five years. There have been several complaints by parents that she is unkind to their children'. Anne has not been offered the job and was shocked when she saw the reference. According to what was said in this case Anne was not even aware of all complaints made on her so she seeing it in her reference was a big shock for her. There is an implied term to take reasonable care in compiling or giving a reference and in verifying the information on which it is based. An employer may be liable to the employee or former employee for any economic loss suffered as a result of a negligent misstatement, just like in the case of Spring V Guardian Assurance plc [1994] IRLR 460. ...read more.

So Eileen has got every right to claim that it was unfair dismissal and if this case should be taken to tribunal the remedies she should be looking to get is Re-instatement or Re-engagement. Re-instatement is to his old job as though he had not been dismissed. Re- engagement is in different job with the same employer his successor or associated employer, in this case of Eileen if she end up winning this case the best advice I can give is for her to chose re-engagement because her current job is so bore and useless for her . (3) Harry has worked for six months as a fund raiser for Green Peas and have been dismissed by company because of been a whistleblower against One of GP's major corporate supporters is 'You have Mail' Ltd (YHM), and GP found out about this they dismissed Harry. It now turns out that the allegation about YHM was untrue. So Harry want to claim for unfair dismissal which I think and I will advise him that he has every right because been a whistleblower covers a lot of aspect in law. There are limits on the matters about which an employer can complain, in the ERA 1996 s 43B provides that a qualifying disclosure means any disclosure which in the reasonable belief of the worker. ...read more.

v The Ministry of pensions [1961] in this case listed an employee but was paid for an agreed minimum number of jobs per year and had to wear company uniforms even also had the company colour on their lorries. But who could choose to do extra work and decided their own routes and used their own Lorries and could use at their pleasure substitute drivers, in Ready Mixed Concrete -v- The Ministry of Pensions 1968 were self-employed contractors, not employees. Third are the multiple tests this test is very important among all 'one is an employee if Provides work or service for remuneration. The business has some degree of control without any terms contrary to the employment relationship.' in the case of Ready Mixed Concrete (south East) Ltd v Ministry of pensions and National Insurance [1968] IRLR, in this case the judge from court of appeal said that, if the right and duties in any contract which was signed, implied that it was a contract of employment, then it was irrelevant what the parties had actually called it. So in this case of Sanjay which current case at hand, he signed a contract, a written agreement entitled self employed which mean his not to act under the employee obligations but still carry out his obligation as a self employed. ...read more.