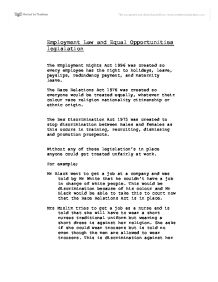 Employment Law and Equal Opportunities legislation The Employment Rights Act 1996 was created so every employee has the right to holidays, leave, payslips, redundancy payment, and maternity leave. The Race Relations Act 1976 was created so everyone would be treated equally, whatever their colour race religion nationality citizenship or ethnic origin. The Sex Discrimination Act 1975 was created to stop discrimination between males and females as this occurs in training, recruiting, dismissing and promotion prospects. ...read more.

Mrs Muslim tries to get a job as a nurse and is told that she will have to wear a short nurses traditional uniform but wearing a short dress is against her religion. She asks if she could wear trousers but is told no even though the men are allowed to wear trousers. This is discrimination against her religion and she could take further action using the Race Relations Act 1976. Mrs Female is the most qualified person at an interview for a doctor but is told she did not get the job. ...read more.

If Employment law/Equal Opportunities weren't in place there would be no equality. This would affect millions of people in the work place. And if discrimination does affect you at work there is a procedure... Take advice from Citizens Advice , Trade Union Rep or solicitor. An ITI form has to be filled out- get from CAB. Sent to office of IT ACAS tries to sort it out If not sorted goes to court By Hannah Wren ...read more.