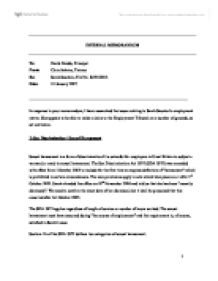 It would be useful to know whether Sarah was a member of any employees' union and whether she brought Ron's conduct to their attention at any time. Additionally, Sarah should be asked whether has mentioned Ron's treatment to the doctor at any time during the last 7 months, as such evidence may well substantiate a claim that her health has also been detrimentally affected by the sexual harassment that she has suffered. In determining Sarah's claim, the Tribunal will consider whether, in light of all the circumstance, the conduct of which Sarah complains should reasonably be considered as having the effect of causing her harassment. If Sarah's case is successful, she will granted an award to reflect what the Employment Tribunal considers "just and equitable" (s.65(1)). This may include compensation for both financial loss suffered by Sarah to date and loss of future wages suffered as a result of the conduct. It may also be possible Sarah to also claim an award for injury to her feelings on this basis (Essa v Laing (2003)). Unlike in unfair dismissal cases, there is no limit to the amount of compensation that may be awarded in discrimination cases. 2) Discrimination based on religious grounds In December 2003, the Employment Equality (Religion or Belief) Regulations 2003 came into force. These prohibit discrimination and harassment in employment on the grounds of religion or belief. As an employee, Sarah had the right not to be treated less favourably than other employees on the basis of her religion or belief, or her perceived religion or belief (i.e. assuming - correctly or incorrectly - that someone has a particular religion or belief). Harassment is unwanted conduct that violates a person's dignity or creates an intimidating, hostile, degrading, humiliating or offensive environment having regard to all the circumstances and the perception of the victim. Harry, by virtue of being Sarah's employer, was required to protect her against such harassment such as Ron's criticism of her belief in Christianity and her desire to wear ...read more.

* Whether Sarah had an effective right of appeal against Harry's decision. In this situation, Sarah has had no such opportunity to appeal Harry's decision. * Whether the whole procedure has been carried out in the same way as previous procedures. Sarah should be asked whether she knows of any such complaints made by other employees at the firm and, if so, how they were dealt with. Therefore, even if Harry is able to establish that Sarah's dismissal was fair or potentially fair, he must also have used a fair procedure. He undoubtedly did not use a fair procedure in dismissing Sarah. She will therefore be able to bring a claim to an Employment Tribunal for unfair dismissal, subject to establishing that she attempted to appeal Harry's decision under the firm's dismissal or grievance procedure. This claim will generally need to be commenced within 3 months of her dismissal. If Sarah is successful in her claim for unfair dismissal, the Employment Tribunal will first consider whether she wishes to be reinstated in her previous position or re-engaged in a similar position with the firm and, if so, it will decide whether such an order would be just and equitable. If not, compensation will be awarded to take account of the losses that Sarah has suffered up to the date of the hearing and the amount of time that she is likely to be unemployed. Compensation in unfair dismissal cases is limited to pure financial loss; damages for non-financial losses will not be recoverable (Dunnachie v Kingston-Upon-Hull City Council (2004)). In summary, Sarah appears to have a claim for discrimination (and sexual harassment) on the grounds of sex and religion. She also has a strong claim for unfair dismissal on the basis that Harry's reasons for her dismissal were unfair, and furthermore, he failed to adhere to correct disciplinary and dismissal procedures. Please do not hesitate to contact me if I can help you further. ...read more.