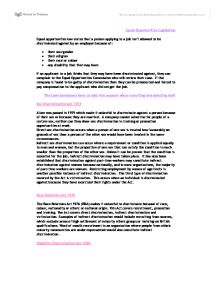 Equal Opportunities Legislation Equal opportunities law states that a person applying to a job isn't allowed to be discriminated against by an employer because of: * their sex/gender * their religion * their race or colour * any disability that that may have If an applicant to a job thinks that they may have been discriminated against, they can complain to the Equal Opportunities Commission who will review their case. If the company is found to be guilty of discrimination then they can be prosecuted and forced to pay compensation to the applicant who did not get the job. The Laws businesses have to take into account when recruiting and selecting staff Sex Discrimination Act 1975 A law was passed in 1975 which made it unlawful to discriminate against a person because of their sex or because they are married. A company cannot advertise for people of a certain sex, neither can they show sex discrimination in training or promotion opportunities at work. ...read more.

This Act operates in a similar way to the Race Relations Act and the Sex Discrimination Act, but also places a duty on an employer to make 'reasonable adjustments' to premises or working practices to allow a disabled person to be employed. The definition of disability is wide and includes physical disabilities, sensory disabilities (visual or hearing impairment), learning difficulties, mental health problems as well as progressive conditions such as Multiple Sclerosis and Aids. Human Rights Act 1998 The Human Rights Act was incorporated into UK law on 1st October 2000 and is intended to implement the European Convention on Human Rights in the UK. The latter outlines several issues, including rights to freedom of thought, conscience & religion, the right to respect for private and family life and in particular, 'The enjoyment of the rights and freedoms... shall be secured without discrimination on any ground such as sex, race, colour, language, religion, political or other opinion, national or social origin, association with a national minority, property, birth or other status.' ...read more.

Unfair dismissal Employees need protection against being unfairly dismissed. Examples of when it is unfair to dismiss an employee include, because: * They are a member of a trade union * They are pregnant * They refuse to work Sunday If an employee thinks that he or she have been unfairly dismissed then they can take their cage to an Industrial Tribunal. This Industrial Tribunal will hear both sides of the argument and if it believes that the employee had been unfairly dismissed then it will award the employee compensation and may force the company to give them back their job. Disciplinary Procedures The contract of employment sets rules that a firm must follow if it wishes to dismiss an employee for unsatisfactory work or misconduct. Usually a verbal warning is given first, then a first written warning is given, and a final written warning is issued. Once this procedure has taken place an employee may be legally dismissed from work. Employees can be instantly dismissed if they are found guilty of Gross Misconduct. This means that they have committed a serious offence at work e.g. theft. ...read more.