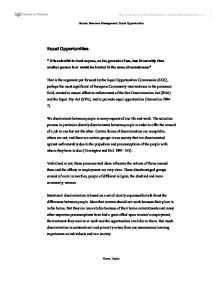 Equal Opportunities " It is unlawful to treat anyone, on the grounds of sex, less favourably than another person is or would be treated in the same circumstances." That is the argument put forward by the Equal Opportunities Commission (EOC), perhaps the most significant of European Community interventions in the personnel field, created to ensure effective enforcement of the Sex Discrimination Act (SDA) and the Equal Pay Act (EPA), and to promote equal opportunities (Donnellan 1994: 1). We discriminate between people in many aspects of our life and work. The selection process in particular directly discriminates between people in order to offer the reward of a job to one but not the other. Certain forms of discrimination are acceptable, others are not, and there are certain groups in our society that are discriminated against unfavourably due to the prejudices and preconceptions of the people with whom they have to deal (Torrington and Hall 1991: 353). Verbalised or not, these preconceived ideas influence the actions of those around them and the effects in employment are very clear. These disadvantaged groups consist of racial minorities, people of different religion, the disabled and more commonly, women. Intentional discrimination is based on a set of clearly expressed beliefs about the differences between people. Ideas that women should not work because their place is in the home, that they are less reliable because of their home commitments and many other unproven preconceptions have had a great affect upon women's employment, the treatment they receive at work and the opportunities available to them. But much discrimination is unintentional and primarily arises from our unconscious learning experiences as individuals and as a society. ...read more.

These initiatives include communication, a complaints procedure, a confidential support line and an inquiry team. One could be forgiven for thinking that if there is a need for such initiatives, then there is still a substantial amount of effort needed from within the organisation. Which brings us back to what was mentioned earlier. Having a good policy on paper does take care of the legal requirements but is there still a critical need for employers to focus on a concept of diversity that isn't driven by legislation? At the Halifax Building society, they believe that equal opportunity is more than just a policy - it's a way of thinking, which is as it should be. In fact, their company information states that 'putting equal opportunities into practice means that the people inside the business are a reflection of the diversity of people outside it - the customers'. But while this is easy to say, it can be a lot harder to transform this philosophy into real results. Saying that, however, their achievements so far are hard to ignore. In raising equality awareness, the Halifax has already been recognised by the 1999 British Diversity Awards and the 19999 Kickstart Equality Awards. They also achieved a gold standard in a national Opportunity Now survey. Halifax's ongoing awareness campaign, aims to inspire and motivate people throughout the organisation to get involved and keep ideas flowing, with workshops, roadshows, discussions and interactive training are responsive and flexible enough to move with the times. In the Army's defence it does appear to place great importance on sex, as well as the ethnic developments of its servicemen and women, and is committed to giving the individuals the opportunity to practice their religious observances wherever possible. ...read more.

On the whole, legislation has made some steps towards improving the employment chances of disadvantaged groups, but there is still a considerable way to go. Equality of opportunity is still dependent on the initiatives undertaken voluntarily by organisations rather than required by the government (Beardwell and Holden 1994: 214) and it is important to emphasise that responsibility for making organisations fairer places rests with the management. They have the power and the resources to make sure that equal treatment becomes a reality and not just an ideal. Unfortunately, in many organisations, this is just not happening. Facts and figures help us to see if under representation of and discrimination against, women and other disadvantaged groups are being addressed. Understanding the ways in which working practises may have an unlimited adverse impact on women is a critical area of research to be conducted by organisations and, indeed, by society. The effects of the legislation have been limited and until practises are free of gender bias it is unlikely that women will have an equal role in organisations (Mullins 1999: 338). But fair's fair. It is an ongoing process. In order to eliminate the need for equal opportunities organisations must be responsive, flexible and open to change. They need to put equality into practice and make their organisation a fair and open-minded business. But disadvantaged groups are growing more powerful by the day, as prophesised by the government: "Nobody believes that legislation by itself can eradicate overnight a whole range of attitudes which are rooted in custom, and are, for that very reason, often unchallenged because unrecognised. But if the law cannot change attitudes overnight, it can, and does effect change slowly (House of Lords 1972/73: 22)." And the change is coming. Human Resource Management: Equal Opportunities Karen Taylor ...read more.