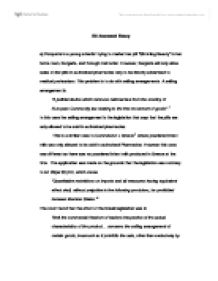 EU Assessed Essay a) Porquette is a young scientist trying to market her pill "Slimming Beauty" in her home town, Burgeria, and through mail order. However, Burgeria will only allow sales of diet pills in authorised pharmacies only to be directly advertised to medical professions. This problem is to do with selling arrangements. A selling arrangement is "A judicial device which removes national law from the scrutiny of European Community law relating to the free movement of goods".1 In this case the selling arrangement is the legislation that says that the pills are only allowed to be sold in authorised pharmacies. This is a similar case to Commission v Greece2 where powdered infant milk was only allowed to be sold in authorised Pharmacies. However this case was different as there was no powdered infant milk produced in Greece at the time. The application was made on the grounds that the legislation was contrary to Art 28(ex 30) EC, which states "Quantitative restrictions on imports and all measures having equivalent effect shall, without prejudice to the following provisions, be prohibited between Member States."3 The court found that the effect of the Greek legislation was to "limit the commercial freedom of traders irrespective of the actual characteristics of the product... concerns the selling arrangement of certain goods, inasmuch as it prohibits the sale, other than exclusively by pharmacies... ...read more.

Quantative restrictions were defined in R v Henn and Darby12 as "...a prohibition on imports inasmuch as this is the most extreme form of restriction. The expression used in [Art 28] must therefore be understood as being the equivalent of the expression "prohibitions or restrictions on imports" occurring in Art 30" Porquette's problem is similar to the Cassis de Dijon13 case and Commission v Germany (Re German beer purity Laws14) as both these cases regard imports which had strict restrictions on them. In Cassis de Dijon, there was a problem with the import of Cassis from France to Germany, as German legislation said that there had to be a minimum alcohol level of 25% per litre of spirit and the French Cassis had an alcohol level of 15-20%. Although the legislation applied to all spirits it had the effect of prohibiting the sale of French cassis. The ECJ held that "the measures had equivalent effect to a quantative restriction. However the court went on to say that in the absence of community rules relating to the production and marketing of products"15 The ECJ also established the principle of mutual recognition, which was followed in Commission v Germany (German Beer Purity) Under German law, beer was only able to have four ingredients and were not allowed any additives. The German authorities claimed this was to protect the health of the consumer, however the additives were allowed in other products. ...read more.