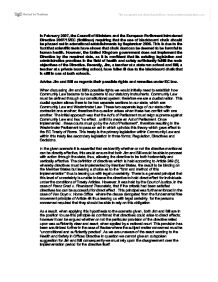 In February 2007, the Council of Ministers and the European Parliament introduced Directive 2007/15/EC (fictitious) requiring that the use of blackboard chalk should be phased out in educational establishments by September 2008. This is due to the fact that scientific tests have shown that chalk dust can be deemed to be harmful to human health. However, the United Kingdom government does not implement the Directive by the required date, as it is confident that its existing legislation and administrative practices in the field of health and safety sufficiently fulfill the main objectives of the Directive. Recently, Jim, a teacher at a state run school and Bill, a teacher at a private boarding school, have fallen ill due to the blackboard chalk that is still in use at both schools. Advise Jim and Bill as regards their possible rights and remedies under EC law. When discussing Jim and Bill's possible rights we would initially need to establish how Community Law became to be supreme to our statutory instruments. Community Law must be defined through our constitutional system; therefore we are a dualist nation. This dualist system allows there to be two separate sections to our state, which are: Community Law and Westminster Law. These two separate legs of our state often contradict one another; therefore the question arises when these two conflict with one another. ...read more.

In passing guidance to Jim and bill in regards to their rights under the directive she is able to rely upon this argument, given that the date of implementation has expired. Conversely the Minister of Health has released a statement which ensured that UK legislation was in compliance with the directive. This may result in Jim and Bill being left with an inconsistency; however it is possible that she could look at the case of Verbond and its reasoning process. The requirements of the Directive were unable to be successfully fulfilled, which raised the question, of whether the initial statement which had been published was sufficient enough to condone any enactment through UK legislation. This is when the Court of Justice intervened and held that the Directive was to protect the rights of the individual, therefore similarities can be drawn with this case as well as the scenario of Jim and Bill provided. It is vital that we realize that directive can have both a horizontal as well as a vertical effect, it is important that this is considered whilst discussing cases which come under the direct effect. Directives are only compulsory on the member state to whom they are addressed and that therefore a directive may not of itself, inflict obligations on an individual and may not be relied upon as such against such a person. ...read more.

As a result three notions were derived; the rule of law breached must be anticipated to award rights on the persons involved; the breach must be sufficiently solemn and there must be a direct casual association between the breach itself and the injury sustained. In the case of Jim and Bill the damage is apparent nevertheless to further her case it is important that we look in depth to whether the infringement concerns a lack of implementation in the correct time frame by the member states. It has been established in the case of Dillenkofer that if the date of implementation has expired the individual has the right to bring a case before national courts as the there has been a sufficient amount of breach thus giving rise to state liability. In relevance to Jim and Bill, one must discuss whether there has been a true implementation of the Health and Safety Offices Directive, if not then the state can be successfully been said to be liable. for that reason in order for Jim and Bill to bring a case before the European Court of Justice the must be able to prove that there has been sufficient vertical direct effect in order to be successful, however, in the slight possibility that this method fails they would be able to sue under state liability. ...read more.