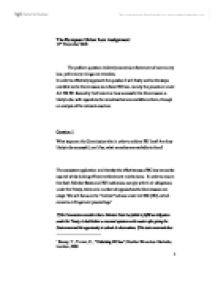 The European Union Law Assignment 17th December 2009 The problem question evidently concerns enforcement of community law, preliminary rulings and remedies. In order to effectively approach the question I will firstly outline the steps available to the Commission to enforce EU law, namely the procedure under Art 226 EC. Secondly I will examine how successful the Commission is likely to be, with regards to the remedies that are available to them, through an analysis of the relevant case law. Question 1 What steps can the Commission take in order to enforce EU Law? Are they likely to be successful, and if so, what remedies are available to them? The consistent application and thereby the effectiveness of EC law cannot be assured whilst lacking efficient enforcement mechanisms. In order to ensure that both Member States and EU institutions comply with their obligations under the Treaty, there are a number of approaches the Commission can adopt. We will focus on the "indirect" actions under Art 226 (EC), which concerns infringement proceedings:1 'If the Commission considers that a Member State has failed to fulfill an obligation under the Treaty, it shall deliver a reasoned opinion on the matter after giving the State concerned the opportunity to submit its observations. If the state concerned does not comply with the opinion within the period laid down by the Commission, the latter may bring the matter before the Court of Justice.' Essentially, if a given Member State does not comply with a particular requirement under the Treaty, it will be given the opportunity to explain its failure to comply, before the Commission delivers a "reasoned opinion". If the Member State persists in its failure to comply, the Commission can bring proceedings against the Member State in the ECJ.2 Along with the "indirect" actions the Commission ...read more.

For convenience, I will refer to such a court as the court of last resort. Where there is no right even to apply to the House of Lords for leave to appeal from a decision of the Court of Appeal - e.g. on a refusal by the Court of Appeal, on a renewed application, to grant leave to apply for judicial review - then the Court of Appeal will be the court of last resort. So Lord Denning MR stated the matter too widely in Bulmer v Bollinger" Given that leave to appeal to the High Court was refused it could be argued that the Asylum and Immigration Tribunal would come under Balcombe's LJ definition of a "court of last resort". This in turn demonstrates that the third paragraph of Art 234 does apply, and so the Asylum and Immigration Tribunal were not entitled to proceed without making a reference to the ECJ. On a related note, if Gerard were to apply for a preliminary reference now, it is submitted that he would be unlikely to be successful. This is because of the similar Italian case, which was decided recently, ruling that the Italian immigration law was incompatible with EU law. The ECJ sated in the case of Da costa10: "The authority of an interpretation already given by the Court may deprive the obligation [under Art 234(3)] of its purpose and thus empty it of its substance. Such is the case especially when the question is materially identical with a question which has already been the subject of a preliminary ruling in a similar case ". This was later approved by the ECJ in CILFIT 11: "National courts or tribunals are not obliged to refer to the Court of Justice a question concerning the interpretation of Community law raised before ...read more.

The applicants had sought an injunction, which would have had the effect of suspending the Act in question until an Art 234 reference could be made. This was difficult for the Lord given that there was no rule in the English public law that would allow this kind of interim relief, or that EU law could allow in a national court to suspend operation of a national law. It therefore made a reference to the ECJ posing this question. The ECJ reemphasised the supremacy of EU law through the principle of cooperation laid down in Art 10(EC), and that any provision of a national legal system, which might impair the effectiveness of community law, even temporarily are "incompatible with those requirements which are the very essence of EC law". Therefore the position of the ECJ with regards to interim relief was evident: "the full effectiveness of Community law would be just as much impaired if a rule of national law could prevent a court seized of a dispute governed by Community law from granting interim relief in order to ensure that full effectiveness of the judgment to be given on the existence o the rights claimed under Community law. It therefore follows that a court which in those circumstances would grant interim relief, if it were not for a rule of national law, is obliged to set aside that law". Applying Factortame to Gerard's circumstances, the ECJ's judgment should prove persuasive in granting Gerard interim relief pending the correct application of Art 39 (EC) on the free movement of workers, which would have the effect of suspending the 2007 Act requiring Gerard to register, meaning he would be entitled to remain in the UK, which is, in all the circumstances probably his most desired remedy. ...read more.