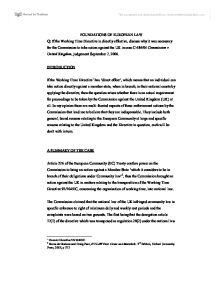 FOUNDATIONS OF EUROPEAN LAW Q) If the Working Time Directive is directly effective, discuss why it was necessary for the Commission to take action against the UK in case C-484/04 Commission v United Kingdom, judgement September 7, 2006. INTRODUCTION If the Working Time Directive1 has 'direct effect', which means that an individual can take action directly against a member state, when in breach, in their national courts by applying the directive, then the question arises whether there is an actual requirement for proceedings to be taken by the Commission against the United Kingdom (UK) at all. In my opinion there are multi-faceted aspects of these enforcement actions by the Commission that lead me to believe that they are indispensable. They include both general, broad reasons relating to the European Community at large and specific reasons relating to the United Kingdom and the Directive in question, each will be dealt with in turn. A SUMMARY OF THE CASE Article 226 of the European Community (EC) Treaty confers power on the Commission to bring an action against a Member State 'which it considers to be in breach of their obligations under Community law'2, thus the Commission brought an action against the UK in matters relating to the transposition of the Working Time Directive 93/104/EC, concerning the organisation of working time, into national law. The Commission claimed that the national law of the UK infringed community law in specific reference to right of minimum daily and weekly rest periods and the complaints were based on two grounds. The first being that the derogation article 17(1) of the directive which was transposed as regulation 20(2) ...read more.

When the commission brings action there is no requisite for such a criteria to be fulfilled, as it is directly against the member state and would deal with problems of all the individuals and consequently covers the problem of no horizontal direct effect for directives.13 HARMONISATION The Commission is seen as a neutral body and is entrusted by the Community to act as a guardian of Community law, originally the binding nature of directives and their effectiveness was intended by the Treaty to be protected by the Commission, irrespective of the existence of the doctrine of direct effect. The concept of harmonisation which needs to be inherent in such a system as the European Union to achieve a single market, needs Commission enforcement to make the law of all member states stand at the same level. Varying attitudes of national courts to European Community law does not aid harmonisation and only an institution of the Community, such as the Commission can be successful in doing this.14 The Working Time Directive was intended to guarantee improved protection of safety and health of workers and is not only a fundamental cornerstone of worker's welfare, but also as a central feature of the social dimension of the internal market, especially in light of enlargement of the Community, and thus the Commission will be more efficient in achieving this harmonisation as it is a body that is aware of the purpose and aims intended by the Directive in question and takes action to maintain these Community principles.15 Another general point in my opinion that is worth noting of is that if a Member State is outvoted in the adoption process of a directive it may purposely drag its feet over the implementation process, in such a ...read more.