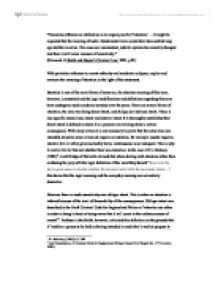 Explain and evaluate the meaning of intention.

"Numerous offences are defined so as to require proof of 'intention' ... It might be expected that the meaning of such a fundamental term would have been settled long ago but this is not so. The cases are inconsistent, judicial opinion has recently changed and there is still some measure of uncertainty." (Ormerod, D Smith and Hogan's Criminal Law, 2005, p.93) With particular reference to recent authority and academic critiques, explain and evaluate the meaning of intention in the light of this statement. Intention is one of the main forms of mens rea, the absolute meaning of this term, however, is unsettled and the legal modifications and definitions regarding this term have undergone much academic scrutiny over the years. There are several forms of intention, the main two being direct intent, and oblique (or indirect) intent. There is also specific intent, basic intent and ulterior intent. It is thoroughly established that direct intent is defined as when it is a persons aim to bring about a certain consequence. With many crimes it is not necessary to prove that the actus reus was intended, however some crimes do require an intention, for example murder requires intent to kill or inflict grievous bodily harm; recklessness is not adequate. This is why it can be vital to find out whether there was intention. In the case of R v Moloney [1985]1, Lord Bridge of Harwich claimed that when dealing with intention rather than confusing the jury with the legal ...read more.

N claimed that he had not intended for anyone to die. His murder conviction was substituted for manslaughter on the grounds that the Judge had misdirected the jury on the intent necessary to establish a charge of murder, due to the way in which he had equated foresight with murder. This set forth the Nedrick test, which stated that "the jury should be directed that they are not entitled to infer the necessary intention unless they feel sure that death or serious bodily harm was a virtual certainty (baring some unforeseen intervention) as a result of the actions of the accused and that he appreciated that was the case". Buxton stated that "Nedrick has laid the practical problems to rest"10, and he was agreed with by other academics who also welcomed the Nedrick test11. Not everyone, however, agreed with Buxton's claim. The crown argued that Nedrick prevents the jury from considering all the evidence relevant to intention within the case, and that this is contrary to the requirements of section 8 of the Act of 196712 which stated that a court or jury must decide whether there was intention "by reference to all the evidence". This was countered, however, by Lord Lane C.J. who stated that "Nedrick does not prevent a jury from considering all the evidence". He argued that the Nedrick test only explains to the court the state of mind necessary to satisfy murder. ...read more.

Like oblique, there has also been confusion over the meaning of ulterior intent. In the case of R v Dakou [2002]17 the defendant was convicted of causing grievous bodily harm with intent. D appealed against his conviction contending that the trial Judge had failed to adequately direct the jury in relation to ulterior intent. He claimed this was because the Judge used "unnecessarily long and convoluted sentences" and had referred to both recklessness and malice which were both irrelevant. The appeal was allowed quashing the conviction. This demonstrates that even in fairly recent case law there has been uncertainty over ulterior intent, similarly to the uncertainty that still clouds oblique intent. Specific intent and basic intent, whilst both coming under the same general term of intention, have very different definitions. Specific intent is when only intention will suffice for a crime, whereas basic intent means that recklessness or negligence will suffice to establish the mens rea of a crime. These are both 'intention' yet are almost opposites which completely broadens the scope of intent and may cause confusion. Overall, as Ormerod claims, it does appear that the meaning of intention is still unsettled. The various types of intent that come under the general term of "intention" mean quite different things. Some types of intent, especially oblique, still have much ambiguity surrounding them. The case law has begun to accumulate some consistency by applying the Nedrick direction, but not enough consistency to settle the long running saga or to prevent academic writers from critiquing the laws and judgements made surrounding the area. ...read more.