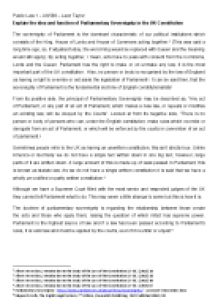 ﻿Public Law 1 ? LW588 ? Leon Taylor Explain the idea and function of Parliamentary Sovereignty in the UK Constitution The sovereignty of Parliament is the dominant characteristic of our political institutions which consists of the King, House of Lords and House of Commons acting together.[1] (This was said a long time ago, so, if adjusted today, the word King would be replaced with Queen and the meaning would still apply). By acting together, I mean, acts have to pass with consent from the Commons, Lords and the Queen. Parliament has the right to make or on unmake any law; it is the most important part of the UK constitution. Also, no person or body is recognised by the law of England as having a right to override or set aside the legislation of Parliament[2]. It can be said then, that the sovereignty of Parliament is the fundamental doctrine of English constitutionalists[3] From its positive side, the principal of Parliamentary Sovereignty may be described as, ?Any act of Parliament, or any part of an act of Parliament, which makes a new law, or repeals or modifies an existing law, will be obeyed by the Courts?. Looked at from its negative side, ?There is no person or body of persons who can, under the English constitution, make rules which override or derogate ...read more.

was intended to embrace. It is, in my opinion, this case.?[13] Regardless of the decision, we are able to see the limits placed on public bodies if they fall under the category of performing functions of a public nature. In this case the rights protected would be Article 2, Right to Life, Article 3, Prohibition of Torture and finally Article 8, Right to Respect for Private and Family Life. Limits placed on public bodies will ensure that none of these are breached, that also goes for the rest of the articles which fall under the Human Rights Act. The Human Rights Act requires our courts to respect laws passed by Parliament. Parliament can decide whether and how to amend the law. In this way, the Act balances the rights and responsibilities of the law-making and judicial parts of our Constitution, leaving the final word to the Democratic process. The Human Rights Act means all public authorities must ensure that everything they do is compatible with Convention rights unless an Act of Parliament makes that impossible. Prior to the Act coming into force, all Government Departments reviewed their existing legislation and procedures to see if they complied with human rights standards, and worked out ways which they could foster human rights positively. ...read more.