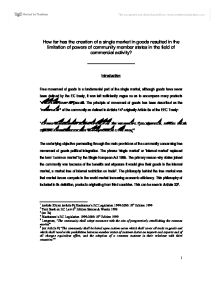 How far has the creation of a single market in goods resulted in the limitation of powers of community member states in the field of commercial activity?

How far has the creation of a single market in goods resulted in the limitation of powers of community member states in the field of commercial activity? Introduction Free movement of goods is a fundamental part of the single market, although goods have never been defined by the EC treaty, it was left sufficiently vague so as to encompass many products "which shall cover all goods"1. The principle of movement of goods has been described as the "corner stone"2 of the community as defined in Article 143 originally Article 8a of the EEC Treaty: "An area without internal frontiers in which the free movement of goods, persons, services and capital is ensured in accordance with the provisions of this treaty"4 The underlying objective permeating through the main provisions of the community concerning free movement of goods political integration. The phrase 'single market' or 'internal market' replaced the term 'common market' by the Single European Act 1986. The primary reason why states joined the community was because of the benefits and exposure it would give their goods in the internal market, a market free of internal restriction on trade5. The philosophy behind the free market was that market forces compete in the world market increasing economic efficiency. This philosophy of included in its definition, products originating from third countries. This can be seen in Article 236. The policy of free movement of goods is based on a concept of a customs union. The EC Treaty strives to seek a customs union under Article 23 (ex Article 9) which means in effect prohibition between member states on customs duties and the adoption of a customs tariff in relations with third countries. It also seeks to eliminate quantitative restrictions on imports and exports and all measures having equivalent effect, Articles 28 and 297. States also have to ensure that discrimination does not exist concerning the procurement of goods between national of member states as in Article 31 (ex article 37). ...read more.

ECJ case law represents an uneasy and often unsatisfactory compromise between the single market principle and the need to safeguard legitimate industrial and commercial property rights protected under national law. The courts more recent decisions indicate a greater willingness to safeguard the interests of creativity and originality protected by intellectual property law and to encourage and reward the taking of commercial risks78 It has been made clear that firstly, A30 is concerned mainly with the protection of non-economic interests as it was stated in Campus Oil v Minister for Industry and Energy [1984] 79. Secondly, the burden of proof that a measure falls within Article 30 rests on the party which relies on that provision usually the national authorities80. Thirdly, in order to avoid being categorised as arbitrary discrimination it must be shown that effective measures to protect the same interests have been taken with regard to imports or exports. Finally, even if a measure complies with all these requirements it may still be regarded as a disguised restriction on trade. This is if it goes beyond what is necessary for the defective protection of the general interest at issue, and in particular if that objective could be achieved by means less restrictive of intra-community trade. In other words a test of proportionality or reasonableness81 is applied. In determining what is reasonable, account must be taken of the information or means of proof available to an importer or exporter. A.30 also allows derogation on grounds of protection of health and life of humans, animals and plants. Consequently health inspections of goods might be justified. However, as in Denkavit Futtermittel[1979], charging for this will always be unlawful, considered to be a customs duty82 Harmonisation Once Community and national laws are harmonised, as intended, the extent can states use Cassis and A.30 to derogate from A.28 and 29 depends on whether there is comprehansive or minimal harmonisation among members. ...read more.

86 Competition Law: Antitrust Policy in the UK and the EEC - Robert Merkin and Karen Williams, 1984 87 "...any aid granted by a Member State or through State resources in any form whatsoever which distorts or threatens to distort competition by favouring certain undertakings or the production of certain goods, shall insofar as it affects trade between Member States, be incompatible with the common market". 88 Case C-39/94 SFEI v La Poste [1996] ECR I-3547 "The concept of aid within the meaning of Article 92... follows that the provision of logistical and commercial assistance to its subsidiaries, which are governed by private law and carry on an activity open to free competition, is capable of constituting State aid...". 89 A Guide to European Union Law - P.S.R.F. Mathijsen, 1999 90 Intermills v Commission [1984] ECR 3809 91 At point 160. 92 Case 730/79 Philip Morris v Commission [1980] ECR 2671 "Aids should promote a development which is in the interest of the Community as a whole...The aid (must be) necessary to bring about (the required) development and ...without that aid the measure in question would not be realised". 93 [1997] O.J. L95/25 94 A Guide to European Union Law - P.S.R.F. Mathijsen, 1999 95 Competition Law in the European Community - David M. Jacobs and Jack Stewart-Clark, 1990 96 Case 161/82 Commission v France [1963] 97 Free Movement of Goods in the European Community - Peter Oliver, 3rd Edition, 1996 98 Case 271/81 Societe Cooperative du Bearn v Mialocoq [1983] ECR 2057 99 Case 30/87 Bodson v Pompes Funebres [1988] ECR 2479 "Article 37 applies in particular to situations in which the national authorities are in a position to supervise, determine or even appreciably influence trade between Member States through a body established for that purpose or a monopoly delegated to others". 100 Commission v Greece [1990] I ECR 4747 101 Free Movement of Goods in the European Community - Peter Oliver, 3rd Edition, 1996 ?? ?? ?? ?? 1 ...read more.