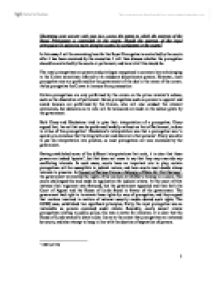 Illustrating your answer with case law, assess the extent to which the exercise of the Royal Prerogative is controlled by the courts. Should the exercise of the royal prerogative be subject to more stringent control by parliament or the courts? In this essay I will be examining how far the Royal Prerogative is controlled by the courts after it has been exercised by the executive. I will then discuss whether the prerogative should be controlled by the courts or parliament, and how strict this should be. The royal prerogatives are powers and privileges recognized in common law as belonging to the Crown sometimes referred to as residuary discretionary powers. However, most prerogative acts are performed by the government of the day in the name of the crown. As by prerogative the Crown is immune from prosecution Certain prerogatives are only performed by the crown on the prime minister's advice, such as the dissolution of parliament. Some prerogatives such as powers to appoint and award honours are performed by the Crown, who will also conduct the relevant ceremonies, but decisions as to who will be honoured are made on the advice given by the government. ...read more.

The Police Act 1964 gave the police powers but, it did not exclude the home secretary using his prerogative powers, hence allowing them to uphold the supremacy of parliament. In R v Secretary of state for the Home department ex parte Fire brigades Union and others,5 the question arose; was the home secretary legally free to leave provisions unrepealed and exercise prerogative powers to establish a scheme radically different from those provisions? The court held that he could, but not too an extent that was so radical from what parliament had original approved of. Here the courts once again upheld statute over the prerogative. In R v Foreign secretary ex parte Everett 19896, the court held that the granting and withholding of passports was subject to review by courts. However, though courts are now generally allowed to review cases where prerogative powers are used, some exceptions do exist. In De Freitas v Benny7 it was held that the case was not susceptible for judicial review as courts have no control over prerogative of mercy. However, in the case of Bentley (1993)8, the court held that indeed the prerogative of mercy was a matter of policy, but there was a failure to recognise that the prerogative was capable of being exercised in the facts of the circumstances, and this failure was reviewable by the courts. ...read more.

It could be argued that parliament alone should have control of the prerogative as it exercises it and is the elected body. But, to have those who exercise it and then scrutinise it in such proximity may not give leeway to a legitimate analysis. Though question time, debates and select committees may allow for scrutiny, the government may argue national security overrides the discussion if it is a 'confidential' matter or even that it is in the public interest. Control of the prerogative by an independent institution from that who exercises the prerogative is crucial. Courts will take into consideration the issue of sovereignty of parliament by upholding statutes. Its perspective on the separation of powers will ensure that public policy matters are dealt with the government alone. However, the government will control the inherent executive powers, such as declarations of war and peace, and such powers may not be justiciable. Having said that, I believe that stringent control of the prerogative power be the equal responsibility of our constitution. As the UK has an unwritten constitution, the prerogative is as a result open to extensive interpretation. I believe certain prerogatives be sent to the reviewing institution-the judiciary. After all, the judiciary was appointed for the administration of justice. ...read more.

A good essay; the student does as asked.

The student may have wished to have developed Dicey's theory throughout, to create a "theme" to the essay.