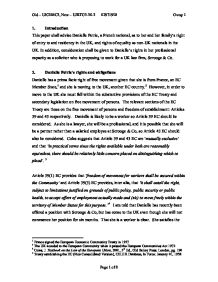 Immigration Law in the United Kingdom: Advice to a client

1. Introduction This paper shall advise Danielle Petrie, a French national, as to her and her family's right of entry to and residency in the UK, and rights of equality as non-UK nationals in the UK. In addition, consideration shall be given to Danielle's rights in her professional capacity as a solicitor who is proposing to work for a UK law firm, Scrooge & Co. 2. Danielle Petrie's rights and obligations Danielle has a prima facie right of free movement given that she is from France, an EC Member State,1 and she is moving to the UK, another EC country.2 However, in order to move to the UK she must fall within the substantive provisions of the EC Treaty and secondary legislation on free movement of persons. The relevant sections of the EC Treaty are those on the free movement of persons and freedom of establishment: Articles 39 and 43 respectively. Danielle is likely to be a worker so Article 39 EC should be considered. As she is a lawyer, she will be a professional, and it is possible that she will be a partner rather than a salaried employee at Scrooge & Co, so Article 43 EC should also be considered. Coles suggests that Article 39 and 43 EC are 'mutually exclusive' and that 'in practical terms since the rights available under both are reasonably equivalent, there should be relatively little concern placed on distinguishing which to plead'. ...read more.

At this stage it is important to note that the ECJ in Baumbast and R13 confirmed that descendants within Article 1014 extends 'both to the descendants of that worker and to those of his spouse. To give a restrictive interpretation to that provision to the effect that only the children common to the migrant worker and his spouse have the right to install themselves with them would run counter to the aim of Regulation No 1612/68' (Para. 57). Therefore, even if the children are Danielle's children and not Pierre's, and provided that they are under the age of 21 (which is likely given they are described as children) and Danielle has available for her family housing considered as normal for national workers in the region where she is employed15, there should be no problem with them moving to the UK. We are told that she has rented accommodation in Harringford, although from the facts it is not possible to ascertain whether it is 'normal' for national workers in the borough where they are renting. Even if the 4 children were not Danielle's own, as is the case with one of the 5 children, which is Pierre's by his previous marriage, so long as they are dependent on Danielle or lived under Danielle's roof in France they would be able to move to the UK with her, as they will be deemed family.16 The test for dependency was established in the ...read more.

As regards the latter there is no evidence on the facts that she is a drug addict or has some other disease or disability that might justify preventing her, on grounds of public health, from entering and residing in the country.26 To satisfy the grounds of public policy or security the threat would have to be genuine and sufficiently serious: see Rutlili v Minister for the Interior.27 Whilst we are not told what drug was found in her possession, which would be important as regards the gravity of the offence, nevertheless, it was only a 'small quantity' and as such she is unlikely to constitute a serious threat to public policy or security. 4.4. Conclusion My advice, based on the available facts, would be that Danielle and her family have a right to enter and reside in the UK, but that that Danielle will not be able to obtain a free bus pass for her younger child nor obtain a remedy under the free movement provisions for the premium that a UK insurance broker is proposing to charge her because she is not a UK national. However, the procedural grounds for Gabrielle, do not appear to have been complied with, and she is unlikely to have warranted deportation under the grounds for derogation anyway, therefore, it is likely that she will soon be able to return to the UK to join her family. ...read more.