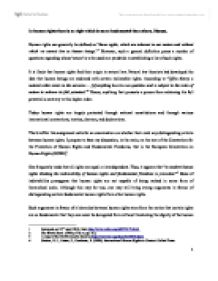 In human rights there is no right which is more fundamental than others. Discuss.

In human rights there is no right which is more fundamental than others. Discuss. Human rights can generally be defined as "those rights, which are inherent in our nature and without which we cannot live as human beings."1 However, such a general definition poses a number of questions regarding whose 'nature' is to be used as a yardstick in establishing a list of such rights. It is likely that human rights find their origin in natural law. Natural law theorists had developed the idea that human beings are endowed with certain inalienable rights. According to "[t]his theory a natural order exists in the universe ... [e]verything has its own qualities and is subject to the rules of nature to achieve its full potential."2 Hence, anything that prevents a person from achieving his full potential is contrary to this higher order. Today human rights are largely protected through national constitutions and through various international conventions, treaties, charters, and declarations. The brief for this assignment calls for an examination on whether their exist any distinguishing criteria between human rights. I propose to base my discussion, in the main, on the text of the Convention for the Protection of Human Rights and Fundamental Freedoms, that is the European Convention on Human Rights (ECHR)3. One frequently reads that all rights are equal or interdependent. Thus, it appears that "in modern human rights thinking the indivisibility of human rights and fundamental freedoms is prevalent."4 Ideas of indivisibility presuppose that human rights are not capable of being ranked in some form of hierarchical scale. ...read more.

Moreover, other rights, example Article 12, which protects the right to marry; Article 1 of Protocol 1, which establishes the right of enjoyment of one's possessions; Article 2 which provides for the right to education; and Article 3 which sets out the obligation to hold free elections, may be described as 'rights with inherent restrictions'. That is, the rights in these Articles are restricted by their own formulation. Thus, it appears possible, from the formulation of the Convention itself, to distinguish between the various rights it establishes. Moreover, it is submitted, that these same rights may be 'categorized' into a four-tier classification. With the proposed classification placing rights in one of the four categories; specifically that of 'absolute rights'; that of 'limited rights'; that of 'substantively qualified rights'; and that of 'rights with inherent restrictions'. Therefore, it is fair to say that these distinctions between the various rights as set out in the provisions of the ECHR may be construed as establishing one right as 'more fundamental' than the other. I will now turn to an examination into whether a distinction or hierarchy between the rights can be founded on a more practical basis. It is submitted that if one were to adopt a system of classification based on individual or subjective criteria it would be possible to successfully argue that any particular right is more fundamental than the other. For if one hinges the criteria by which such a distinction, or 'ranking' of rights, is made on factors which are largely personal, the ...read more.

This state of affairs could result in derogations from certain 'lower' rights not only becoming more frequent but in time even becoming accepted. However, it is important to keep in mind the basic and longstanding tenet that a right without a remedy cannot be regarded as a real right, or in other words that "[w]ithout remedy, a right remains only on the paper."7 This argument is encapsulated in the Latin maxim ubi ius ibi remedium ubi remedium ibi ius, literally meaning where there is a right there is a remedy and where there is a remedy there is a right. This maxim does in fact give some weight to the argument that the right enshrined under Article 13 of the ECHR may be considered as 'more fundamental than others'. Nevertheless, owing to the pitfalls that such an argument would present it is far more responsible to describe the right to an effective remedy as expressed in Article 13 of the ECHR as merely a 'first among equals'. 1 Retrieved on 23rd April 2010, from http://www.unhcr.org/46937d1f2.html. 2 The World Book. (1993). (Vol. 4, pp. 41). 3 A copy of the ECHR may be found at http://www.hri.org/docs/ECHR50.html. 4 Steiner, H. J., Alston, P., Goodman, R. (2008). International Human Rights in Context. Oxford Press. 5 Article 15(2) of the ECHR. 6 Henrard, K. (2000). Devising an Adequate System of Minority Protection: Individual Human Rights, Minority Rights, and the Right to Self-determination. Kluwer Law. 7 Thune, G.H. (1993). The Right to an Effective Remedy in Domestic Law: Article 13 of the European Convention on Human Rigths. ?? ?? ?? ?? 1 ...read more.