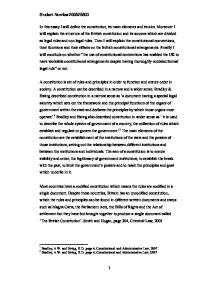 In this essay I will define the constitution, its main elements and its aim. Moreover I will explain the structure of the British constitution and its sources which are divided as legal rules and non legal rules. Then I will explain the constitutional conventions, their functions and their effects on the British constitutional arrangements. Finally I will conclude on whether "the use of constitutional conventions has enabled the UK to have workable constitutional arrangements despite having thoroughly outdated formal legal rule" or not. A constitution is set of rules and principles in order to function and ensure order in society. A constitution can be described in a narrow and a wider sense. Bradley & Ewing described constitution in a narrow sense as 'a document having a special legal sanctity which sets out the framework and the principal functions of the organs of government within the state and declares the principles by which those organs must operate'.1 Bradley and Ewing also described constitution in wider sense as ' it is used to describe the whole system of government of a country, the collection of rules which ...read more.

They are defined by AV Dicey as 'understandings. Habits or practices which, though they may regulate the conduct of the several members of the sovereign power, of the Ministry, or of other officials, are not in reality laws at all since they are not enforced by the courts'.3 The purpose of the constitutional conventions is to ensure that constitution is developing on the basis of needs. Some significant characteristics of political system in Britain are regulated by some of the conventions such as the role of the Monarch, the position of the Prime Minister and Cabinet. Barnett stated that ' a constitutional convention is a non legal rule which imposes an obligation on those bound by the conventions, breach or violation of which will give rise to legitimate criticism , and that criticism will generally take the form of an accusation of "unconstitutional conduct"'.4 Lord Jenning suggested an effective test to determine the existence of a constitutional convention. This test is thee-part test which three questions must be asked. ...read more.