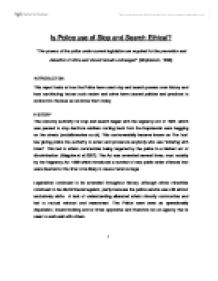 Is police use of stop and search ethical?

Is Police use of Stop and Search Ethical? "The powers of the police under current legislation are required for the prevention and detection of crime and should remain unchanged". (Mcpherson, 1998) INTRODUCTION This report looks at how the Police have used stop and search powers over history and how contributing factors such r****m and crime have caused policies and practices to evolve into the laws as we know them today. HISTORY The statutory authority for stop and search began with the vagrancy Act of 1824, which was passed to stop destitute soldiers coming back from the Napoleonic wars begging on the streets (socialistworker.co.uk). This controversially became known as The 'sus' law giving police the authority to arrest and prosecute anybody who was 'loitering with intent'. This led to ethnic communties being targeted by the police in a blatient act of discrimination. (Maguire et al 2007). The Act was amended several times, most notably by the Vagrancy Act 1839 which introduced a number of new public order offences that were deemed at the time to be likely to cause moral outrage. Legistlation continued to be amended throughout history, although ethnic minorities continued to be discriminated agaisnt, partly because the police service was still almost exclusively white. A lack of understanding alienated ethnic minority communties and led to mutual mistrust and resentment. The Police were seen as operationally depandant, inward looking and at times oppresive and therefore not an agency that is seen to work well with others. ...read more.

This debate has intensified following the terrorist attacks of September 11, 2001, in the United States, and, more recently, the bombings in the London Underground, on July 7, 2005, in the United Kingdom (Bowling, 2006). It could be argued that Section 44 of the Terrorism Act 2000 was introduced to specifiaclly target Muslims. In 2009 the minister of state Vernon Coaker admitted that 'Counter-terrorism powers should only be used for counter-terrorism 3 purposes'. The use of Section 44 can be problematic and is therefore subject to annual review by the Independent Reviewer of Legislation on Terrorism. Webster (2003) as cited in Phillips and Bowling (2007) argue that not all ethnic minority groups are terroists and that in the past police have under protected them. "Young black and British Asian kids...are being stabbed and shot and the rules are getting in the way of protecting them" (Cameron , 2007) The British government's response to the 2001 disturbances in northern England called for a renewed emphasis to be placed upon the concept of community cohesion as a way of establishing a common sense of national identity, irrespective of ethnicity, to resolve escalating tensions between different cultural, religious, and ethnic groups, but fears over the threat of Islamic extremism, expressed through alarmist media narratives have raised levels of public anxiety over the compatibility of Islamic values with conventional Western ideology (Macpherson, 2008). DISCUSSION Despite the positive steps taken following the murder of Stephen Lawrence to tackle problems of r****m in the United Kingdom, there remain a number of formidable and ongoing challenges to the maintenance of race relations in the United Kingdom. ...read more.

(Rowe, 2004). CONCLUSION Following the murder of the black London teenager, Stephen Lawrence, in 1993, and the subsequent MacPherson Inquiry in 1999, the police accepted the label that they were "institutionally r****t." This did not mean that the problem was one of overtly r****t behaviour being displayed by a minority of rogue officers, but rather that the problem was one of unwitting r****m because of policies, procedures, and practices that served to inadvertently discriminate against blacks and other minority groups. Since 1999, the police have been encouraged to undertake reforms to consult hard-to-reach groups within the community and to recruit, retain, and progress black and minority officers within the forces throughout the UK (Bowling, 2006). As well as the issue of diversity, since the Crime and Disorder Act of 1998, the police have been made to work in partnership with other criminal justice and social agencies so the recipients of welfare services are treated more like paying customers. This is a challenge because it requires police leaders who work as generalists to cooperate with other professional groups who may not share their view of the world (McGhee, 2007). Crime is now being seen as a social problem and not just a policing problem. 6 Stop and search is an infridgement of the liberty of the individual concerned and police action must be based exclusively on, and does not exceed, powers granted by statute. Police leaders of the future in the UK have to be able to meet this challenge for genuine improvements in social outcomes to be made to try and minimize tradegies such as Stephen Lawerence. ...read more.