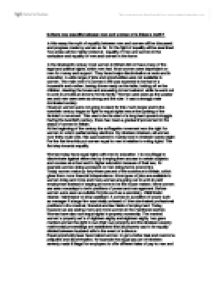 Is there now equality between men and women or is it just a myth?

Is there now equality between men and women or is it just a myth? In this essay the myth of equality between men and women will be discussed and progress made by women so far, for the fight of equality will be examined. Two areas will be mainly looked at; equality of men and women in the workplace and equality of men and women in the home. In the nineteenth century most women in Britain did not have many of the legal and political rights, which men had. Most women were dependant on men for money and support. They faced major discrimination at work and in education. A wide range of jobs and opportunities were not available to women. The main role of a woman�s life was expected to be that of a housewife and mother, having dinner ready on the table, looking after the children, cleaning the house and answering to her husband, while he went out to work to provide an income for his family. Women were seen as the weaker sex and men were seen as strong and the ruler. It was a strongly male dominated society. ...read more.

The question that needs to be addresses is, have women won the battle of equality between men and women? The answer is no which can be seen in work and in the home. When talking about women at work, it can be assumed that this refers to paid employment. However it is important to remember there is one job which is performed full time almost exclusively by women-in paid housework or domestic labour. The domestic work done by women is hardly ever recognised as real work. Many housewives themselves often devalue the status of their work and they simply sum it up, as 'I�m only a housewife.� It is estimated that an average of seventy seven hours a week are spent on housework and related tasks which is far more than most people spend in paid employment. Being a housewife does not have any of the advantages of paid employment such as regular working hours, paid holiday, sick pay or chance of promotion. Housework and childcare are still seen as primarily the main responsibility of women even when both partners are working full time outside the home in paid employment. ...read more.

It is often assumed single women will leave paid employment to marry and have children, and married women particularly are often seen as unreliable because of the assumption that they will be absent to look after sick children, although research has shown there is little difference in the number of days absent between men and women. As a result of these factors, women are often overlooked for training and promotion to senior positions by male employers. Top jobs require a continuous career pattern in the twenty to thirty age period, yet these are the usual child bearing years for women. So while men continue to work and get promoted, women miss their opportunities. Finally, married women are more likely to move house and area for their husbands job promotion rather than their own. This means women interrupt their career and have to start again, often at a lower level, in a new job, which means the men are getting promotion at the expense of lost opportunities of their wives As can be seen above and throughout this essay, yes it is true that women have made huge progress, but total equality in the home and in the workplace is still a myth. No doubt the fight will still go on, and maybe some day the battle of the sexes will end and meet in equilibrium. ...read more.