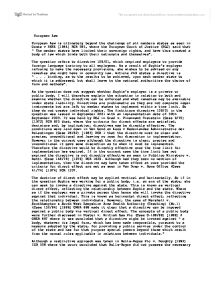 Justice (ECJ) said that &quot; The member states have limited their sovereign rights, and have thus created a body of law which binds both their nationals and themselves&quot;.

European Law European Law is ultimately beyond the challenge of all members states as seen in Costa v ENEL [1964] ECR 585, where the European Court of Justice (ECJ) said that " The member states have limited their sovereign rights, and have thus created a body of law which binds both their nationals and themselves". The question refers to directive 109/01, which required employers to provide foreign language training to all employees. As a result of Sophie's employer refusing to make the necessary provisions, she wishes to be advised on any remedies she might have in community law. Article 249 states a directive is " . . . binding, as to the results to be achieved, upon each member state to which it is addressed, but shall leave to the national authorities the choice of form and methods". As the question does not suggest whether Sophie's employer is a private or public body, I will therefore explain the situation in relation to both and examine whether the directive can be enforced and what remedies may be available under state liability. Directives are problematic as they are not complete legal instruments but are left to member states to implement within a time limit. So they do not create individual rights. The fictitious directive 109/01 in the question was issued in September 2001 with an implementation date of 30th September 2003. It was held by ECJ in Grad v. Finanzamt Traustein (Case 9/70) [1970] ECR 825 that, where the criteria for direct effects are satisfied, decisions and, by implication, directives may be directly effective. ...read more.

EMO Air Cargo (UK) Ltd [1993] 1 WLR 49 noted that national courts were only required to translate domestic law to accord with the directive 'only if it was possible to do so'. Therefore it can be seen that the indirect application of EC directive by national courts cannot be guaranteed. However in the case of Kolpinghuis Nijmegen (Case 80/86) [1987] ECR 3969 the ECJ has imposed limitations on the indirect effect of directives. It was held in this case that a directive cannot have indirect effect in criminal proceedings where it would cause the accused to be convicted where he would otherwise have been acquitted. Nor can a directive indirectly aggravate guilt as seen in Arcaro (Case C-168/95) [1996] ECR I-4705 where the ECJ held that the obligation to interpret national law in line with a directive reaches a limit where the obligation has not been transposed. Finally it can be seen from the case of Faccini Dori v. Recreb Srl (Case C-91/92) [1994] ECR I-3235 that directives do not create horizontal enforceable rights. In relation to the current directive 109/01 the circumstances may not make it possible to apply the directive even though the court may be under an obligation to apply national law either predating or postdating to achieve the results envisaged by the directive. As the courts concluded in Wagner Miret, it may not be possible to translate domestic law to comply with EC directive, particularly when the provision of domestic law are clearly at odds with an EC directive, and there is no evidence that the national legislature intended national law to comply with its provisions, or with a ruling on it provisions by the ECJ. ...read more.

However if Sophie wishes to continue to take advantage of the directive and any remedies she may have in community law, this will depend very much on whether her employer is a private or public body. If Sophie's employer is a public body she can enforce the directive against the state by vertical direct effect as long as the criteria for direct effect are satisfied. Although if her employer is a private body it becomes more problematic as she cannot enforce the directive against the individual, as directives do not create horizontal enforceable rights. But she may be able to rely on the doctrine of indirect effect, where directives may be enforced against an individual, but this is not guaranteed even though the courts may be obliged to translate domestic law in line with a directive, sometimes this may not be possible, because the provisions of the domestic law may be clearly at odds with the EC directive and further there is no evidence that the national legislature intended national law to comply with its provisions or with a ruling on its provisions by the ECJ. Therefore the alternative would be to claim damages against the state for non-implementation of a directive. Sophie can argue that the directive was clear and precise outlining her rights, which were sufficiently in serious breach by the member state whom had manifestly and gravely disregarded the limits of its discretion and as a result failed to implement the directive and thus breached EC law and which as a direct result Sophie suffered the loss of not being able to take advantage of the foreign language training. ...read more.