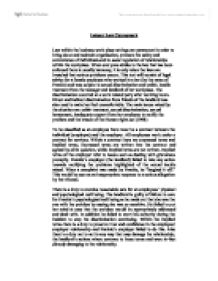 Labour Law Coursework Law within the business work place settings are paramount in order to bring about and maintain organisation, promote the safety and convenience of individuals and to assist regulation of relationships within the workplace. When everyone abides to the law that has been enforced there is usually harmony, it is only when the laws are breached that serious problems occurs. This text will consist of legal advice for a female employee who worked in a bar (by the name of Frankie) and was subject to sexual discrimination and unfair, hostile treatment from the manager and landlord of her workplace. The discrimination occurred at a work related party after working hours. Direct and indirect discrimination from friends of the landlord was also used to make her feel uncomfortable. The main issues raised by the situation are unfair treatment, sexual discrimination, sexual harassment, inadequate support from her employee to rectify the problem and the breach of the Human rights act (1998) To be classified as an employee there must be a contract between the individual (employee) and the employer. All employees work under a contract for services. Within a contract there are expressed terms and implied terms. Expressed terms are written into the contract and agreed by all in question, whilst implied terms are not written. ...read more.

The main sensitive areas are sex, age, disability and race. If every candidate which applied for the job has genuine occupational qualifications and the decision to employ was based on race, sex, or other criteria then this is a breach of law. If it can be proved that the only reason Frankie was employed was because she wore mini skirts and had "great assets" (as the bar manager claimed) then she would have a strong case against her employer. Although the decision to employ her was in her favour, the reasons behind it (if true) are not appropriate. If the employer's reasons for employing her do not coincide with fair employment laws then the employer would be guilty not just of discrimination towards Frankie but of discrimination against other candidates who may have applied for the same job. In conclusion advice to Frankie would be to present her case to the tribunal as she has solid evidence in the form of the offensive text messages of a sexual nature sent to her phone by the bar manager. Her unfair treatment would not be taken lightly by the tribunal as it was with her employer and there is a strong possibility that disciplinary actions would be taken against her employer and she could make a claim. Overall the possibility of Frankie making a claim at the Employment Tribunal is a strong one. ...read more.