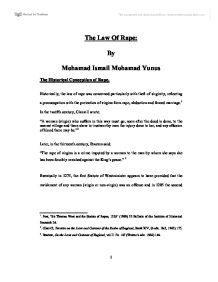 The Law Of r**e: By Mohamad Ismail Mohamad Yunus The Historical Conception of r**e. Historically, the law of r**e was concerned particularly with theft of virginity, reflecting a preoccupation with the protection of virgins from r**e, abduction and forced marriage.1 In the twelfth century, Glanvill wrote: "A woman (virgin) who suffers in this way must go, soon after the deed is done, to the nearest village and there show to trustworthy men the injury done to her, and any effusion of blood there may be."2 Later, in the thirteenth century, Bracton said: "The r**e of virgins is a crime imputed by a woman to the man by whom she says she has been forcibly ravished against the King's peace." 3 Eventually in 1275, the first Statute of Westminister appears to have provided that the ravishment of any woman (virgin or non-virgin) was an offence and in 1285 the second Statute of Westminister turned this into a capital offence,4 remaining so until the nineteenth century.5 The Definition and Scope of r**e. This part will focus mainly on the English law of r**e, its relationship with other s****l offences6 and the options for law reform within the present framework of the law. In England, until 1976 there was no statutory definition of r**e. Section 1 (1) of the s****l Offences Act 1956 simply provided: "It is felony for a man to r**e a woman." However, this provision has now been replaced by section 142 of the Criminal Justice and Public Order Act 1994, which defines r**e by substituting a new section 1 of the s****l Offences Act 1956. By section 1(1) of the 1956 Act it is now an offence for a man to r**e a woman or another man. Sub-section (2) provides that a man commits r**e if: (a) he has s****l intercourse with a person (whether v*****l or a**l) who at the time of the intercourse does not consent to it; and (b) ...read more.

The Crown's case was that the appellant had broken into a dwelling house and then twice raped a young woman who was the occupier. It was not disputed that intercourse took place twice, but the defence was that the woman had consented or alternatively that the appellant had honestly believed that she was consenting. On a charge of r**e, the appellant gave evidence that after he had penetrated the woman for the second time; he became aware that she was not consenting but that he did desist from intercourse. The trial judge directed the jury that, if part way through an act of intercourse, a man who had previously thought that the woman was willing, realises that she is unwilling but continues with the act of intercourse, it then become r**e. The jury convicted the appellant and he appealed against conviction on the ground that this was misdirection. The appellant appealed to the Court of Appeal, contending that for the purposes of the 1961 Act, a man who penetrated a woman with her consent could not become guilty of r**e by continuing intercourse after a stage when he realised the woman was no longer consenting, because r**e was penetration without consent and, once penetration was complete, the act of r**e was concluded.57 On appeal, Richmond P. and Richard J. held that the direction was correct. Their Honours recognised the unsatisfactory results that flowed from such a construction. Richmond P. said: "We have in mind, for example, a woman suddenly wishing a man to desist at a late stage of intercourse or the failure of a man to fulfill a promise to desist before reaching a climax".58 Their Honours, however, were swayed by the fact that if their construction were not to be adopted, it would lead to the unsatisfactory result that "a girl who had been seduced into permitting a slight degree of penetration could not cry r**e if she were then fully and by violence forced against her obvious wishes and subjected to a complete act of intercourse."59 Woodhouse J. ...read more.