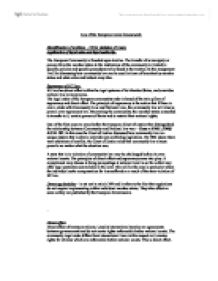 Law of the European Union

Law of the European Union Coursework. Identification of problem - UK in violation of treaty Application of legal rules and legal authority. The European Community is founded upon treaties. The transfer of sovereignty or powers from the member states to the institutions of the community is limited to specific policies and specific procedures to be found in the treaties. In this assignment I will be discussing how community law can be used in times of breaches by member states and what action individuals may take. Supremacy of EC Law. EU law has direct effect within the legal systems of its Member States, and overrides national law in many areas. The legal order of the European community order is based of the twin pillars of supremacy and direct effect. The principle of supremacy is the notion that if there is ever a clash with Community Law and National Law, the community law will always prevail over supremacy law. By creating the community, the member states consented to transfer to it, certain powers of theirs and to restrict their national rights. One of the first cases to come before the European Court of Justice that distinguished the relationship between Community and National law was - Costa v ENEL [1964] E.C.R. ...read more.

If member states were free to stray from their obligations to implement directives then may important directives would remain implemented. As a result of this, the UK cannot use the defence that they thought the national curriculum was sufficient enough to encompass the requirements of the Directive. If this was the case then a lot of directives wouldn't be implemented because member states would think they weren't necessary. The effectiveness of a directive would be weakened if the nationals of a member state that had failed to implement a directive were denied the rights contained in the directive by the national courts. Gunilla can use the directive because if the courts deny her this, it would mean that she was denied individual rights that are contained in the directive. The ECJ stated three conditions that had to be satisfied for there to be a cause of action for non-implementation3. - The Directive had to create rights for individuals - directive 2006/124 did create rights for individuals - Those rights had to be ascertainable from the text of the directive - which would be available from the text of the directive - There had to be a causal link between the non-implementation and the claimant's loss - and there is a link between the non implementation and Gunilla's loss. ...read more.

If the individuals can not obtain compensation when their rights were infringed then according to Art 10, the EC law would come into question and the protection of the EC obligations. When the EC obligations have been breached therefore, individuals should receive adequate compensation. In order to decide the availability of compensation for Gunilla, the courts will have to have an assessment of the gravity of the breach of the UK. Gunilla can use direct effect to impose proceedings on the UK government. She can also claim for damages for losses that occurred under state liability. Community law will back Gunillas claim up using the rights that are entitled to all individuals by the EC law and the Directives. 1 Tullio Ratti v Ministerio Pubblico 1979 ECR 1629 2 [1964] C.M.L.R. 423 3 Francovich v Italy [1991] E.C.R. I-5357 4 In 837 Grad v Finanzamt Truanting 1970 ECR 825 at 5 Foster and others v British Gas plc [1991] 2 W.L.R. 1075 6 Marshall v Southampton Area Health Authority (1986) ECR 723 7 Duke v GEC Reliance 1988 2WLR 359 8 M.H. Marshall v. Southampton and South West Hampshire Area Health Authority [1990] 3 C.M.L.R. 425 9 ?? ?? ?? ?? ...read more.