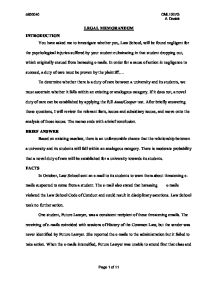 LEGAL MEMORANDUM INTRODUCTION You have asked me to investigate whether you, Law School, will be found negligent for the psychological injuries suffered by your student culminating in that student dropping out, which originally ensued from harassing e-mails. In order for a cause of action in negligence to succeed, a duty of care must be proven by the plaintiff.... To determine whether there is a duty of care between a university and its students, we must ascertain whether it falls within an existing or analogous category. If it does not, a novel duty of care can be established by applying the full Anns/Cooper test. After briefly answering those questions, I will review the relevant facts, issues and subsidiary issues, and move onto the analysis of those issues. The memo ends with a brief conclusion. BRIEF ANSWER Based on existing caselaw, there is an unfavourable chance that the relationship between a university and its students will fall within an analogous category. There is moderate probability that a novel duty of care will be established for a university towards its students. FACTS In October, Law School sent an e-mail to its students to warn them about threatening e-mails suspected to come from a student. The e-mail also stated that harassing e-mails violated the Law School Code of Conduct and could result in disciplinary sanctions. Law School took no further action. One student, Future Lawyer, was a consistent recipient of these threatening emails. The receiving of e-mails coincided with sessions of History of the Common Law, but the sender was never identified by Future Lawyer. She reported the e-mails to the administration but it failed to take action. When the e-mails intensified, Future Lawyer was unable to attend first that class and then the rest of her classes because of serious psychological injuries that were directly caused by the harassing e-mails. She received care from a physician but was unable to complete the semester and dropped out of Law School. ...read more.

The nature of the harassment suffered by Future Lawyer was not a product of her physical environment of which she had no control over, but through e-mails. In the cited cases, the harassment was a form of discrimination, which has not been confirmed in the content of the threatening e-mails. Moreover, common law has not established that the duty owed by a university is equivalent to the duty owed by an employer. The content of the threatening emails is unclear and is important to ascertain because it will determine whether Guzman and Hinds are likely to be interpreted as binding precedent for the present lawsuit. In Guzman, the sexual harassment suffered was considered a form of discrimination in violation of the British Columbia Human Rights Act18, and the issue in Hinds concerned harassment in the form of racial discrimination in contravention to the Canadian Human Rights Act.19 Both Acts imposed a statutory obligation on employers to maintain discrimination-free employment.20 It is presently unknown whether the content of the emails received by Future Lawyer would amount to discrimination, which would essentially determine the relevance of Guzman and Hinds. In addition, since the protection from discrimination identifies employment but not enrolment in a university, it is necessary to examine the Law School's Code of Conduct for any equivalent provisions that might give rise to a duty to control. 4) Is this relationship likely to meet the test for finding a novel duty of care? Since there is no obvious precedent that establishes an affirmative duty of care owed by a university to its students, there is a considerable chance that the court will apply the full Anns/Cooper test to see if a novel duty of care will arise. The first branch of the Anns/Cooper test considers if the harm that occurred was the reasonably foreseeable consequence of the defendant Law School's act. If so, a prima facie duty will arise and the test moves on to the second branch of the test, which allows the defendant to raise any countervailing policy considerations that might negate the duty of care. ...read more.