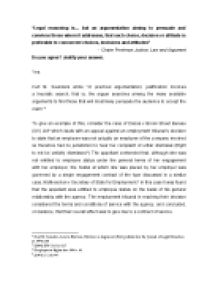 ﻿?Legal reasoning is? but an argumentation aiming to persuade and convince those whom it addresses, that such choice, decision or attitude is preferable to concurrent choices, decisions and attitudes? - Chaim Perelman Justice, Law and Argument Do you agree? Justify your answer. Yes. Kurt M. Saunders wrote ?In practical argumentation, justification involves a heuristic search; that is, the arguer searches among the many available arguments to find those that will most likely persuade the audience to accept the claim.?[1] To give an example of this, consider the case of Dacas v Brook Street Bureau (UK) Ltd[2] which deals with an appeal against an employment tribunal?s decision to state that an employee was not actually an employee of the company involved so therefore had no jurisdiction to hear her complaint of unfair dismissal (Right to not be unfairly dismissed.[3]) The appellant contended that, although she was not entitled to employee status under the general terms of her engagement with her employer, the hostel at which she was placed by her employer was governed by a single engagement contract of the type discussed ...read more.

In dealing with this case the appellant?s solicitors have used precedent to strengthen their chance of winning the appeal. Not only have they used precedent to strengthen their chances of winning the appeal, they have also taken a case not just from any other court, they have cleverly taken a case that is not just similar, but a case that was heard in the Court of Appeal. The solicitors have not only relied on the fact that both cases are similar and share characteristics, but they have also chosen a case whereby a judge in a lower court is normally expected to obey the previous decisions of Higher Courts within their jurisdiction. This relationship of lower to higher in the ?chain of command? is usefully understood as vertical precedent.[5] In doing this, the appellant?s solicitors have massively increased their chance of a successful appeal bid, and as we know, they were successful. This brings us back to the quote from Kurt M. ...read more.