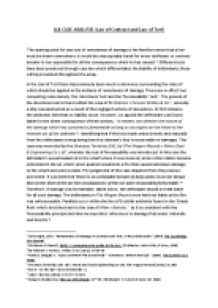 LLB CASE ANALYSIS (Law of Contract and Law of Tort)

﻿LLB CASE ANALYSIS (Law of Contract and Law of Tort) ?The starting point for any rule of remoteness of damage is the familiar notion that a line must be drawn somewhere: it would be unacceptably harsh for every tortfeasor or contract breaker to be responsible for all the consequences which he has caused?.[1] Different tests have been produced through case law which differentiates the liability of defendants; these will be presented throughout the essay. In the Law of Tort there has previously been much controversy surrounding the rules of which should be applied in the instance of remoteness of damage. There are in effect two competing rules namely: the ?directness? test and the ?foreseeability? test[2]. The genesis of the directness test is found within the case of Re Polemis v Furness Withey & Co.[3], whereby a ship was destructed as a result of the negligent actions of stevedores. At first instance the arbitrator held that no liability arose. However, on appeal the defendant was found liable for the direct consequence of their actions, ??it matters not whether the nature of the damage which has sustained is foreseeable as long as its origins can be linked to the relevant act of the defender?[4]; identifying that if the loss made arises directly and naturally from the defendants wrong doing then the claimant?s loss is recoverable in damages. ...read more.

In addition, it held ?Where knowledge of special circumstances is relied on, the assumption is that the defendant undertook to bear any special loss which was referable to those special circumstances?[27]. The case of H. Parsons (Livestock) Ltd v Uttley Ingham & Co Ltd[28] (hereafter referred to as H. Parsons) gave foresight into the applicable remoteness test in concurrent liability. In the case the plaintiff was claiming for the financial loss associated with diseased and deceased pigs, alongside the potential future loss of sales of such pigs. It was held ?only the type of damage need be foreseeable, not the exact extent of damage suffered?[29]; therefore, the foresight that some physical damage was probable to the pigs was sufficient to establish serious physical damage. ?Accordingly, liability is therefore, limited by a dual-limbed test: first, damage must arise naturally from the breach ? in other words it must arise in the usual course of things; secondly, damage must reasonably be supposed to have been contemplated by, at least, the defaulting party, as the probable consequence of the breach. Liability rests, therefore on actual and imputed knowledge at the time the contract was made.?[30] Jackson v Royal Bank of Scotland (RBS) ...read more.

not on the contemplation of the degree of injury, but, simply on the proof that the loss could reasonably have been anticipated.[46] However, the difference remains that Tort law tends to protect the claimant; while Contract law protects the defendant. In Tort foreseeability of damage is required at the moment the tortious act is committed, whereas in Contract the relevant time is at the point at which the contract is concluded,[47] (Jackson). Differences also arrive in relation to the concept of contributory conduct on the part of the claimant. In Tort the defence of contributory negligence is of general application; whereas in Contract it will only be available if there is a breach within the contractual duty to take care.?[48] In regards to remoteness of damage, concerning both the law of Contract and Tort, there remains much controversy, as to ?whether remoteness is to be regarded as a separate test or is to be incorporated into the test of what is reasonably foreseeable.? Moreover, there is still debate over the perspective adopted that, ?what is reasonably foreseeable cannot be determined without having regard to remoteness?[49]. Therefore, it may be concluded that although the close interrelationship between Contract and Tort law has developed establishing specific tests for remoteness of damage; there is still scope for improvements in said area. ...read more.