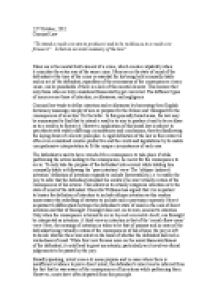 Mens Rea. The different types of mens rea are those of intention, recklessness, and negligence.

This state of mind was equated to the defendant being aware of the situation. The appeal was consequently dismissed. Another definition of recklessness used to be that of Caldwell recklessness, the application of which was later discontinued by the House of Lords. Caldwell recklessness defines recklessness as the failure to consider an obvious risk that a person is aware of. It differs from the Cunningham recklessness to the extent that it includes even those who may not have been aware of such a risk posed. In Elliot v C[9], a 14-year-old mentally handicapped girl lit fire to a shed and was convicted on the grounds that she failed to see the obvious danger of lighting fire in shed. In R v G and R[10], two boys (11 and 12 yrs old) decided to picnic outdoors and afterwards left burning newspapers under a wheelie bin. There was damage to property of over 1 billion pounds as a consequence of a fire started by the boys and the children were convicted of arson on the basis of Caldwell recklessness. In the House of Lords, this decision was overturned and a departure from Caldwell was observed due to the following reasons. Firstly, it was believed that it was important to consider the state of mind of the defendant before conviction and Caldwell recklessness sometimes did not allow this. Secondly, the definition led to some ?obviously unfair decisions?, which could be seen from the fact that they opposed the sense of the juries deciding these cases. Further, there was also a multitude of academic criticism for Caldwell recklessness, which the Lords felt should not have been entirely ignored. Lastly, and most importantly, it was held that the interpretation of ?reckless? in Caldwell was incorrect. ?Reckless? was construed to mean that mens rea required to be read into every crime, following previous dicta of courts where all criminal liability required an existence of mens rea. ...read more.