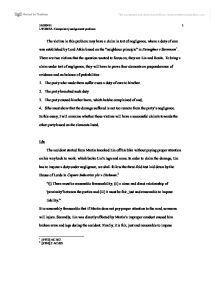 Negligence Case. The victims in this problem may have a claim in tort of negligence, where a duty of care was established by Lord Atkin based on the neighbour principle in Donoghue v Stevenson[1].

The victims in this problem may have a claim in tort of negligence, where a duty of care was established by Lord Atkin based on the "neighbour principle" in Donoghue v Stevenson1. There are two victims that the question wanted to focus on; they are Lin and Rosita. To bring a claim under tort of negligence, they will have to prove four elements on preponderance of evidence and on balance of probabilities: 1. The party who made them suffer owes a duty of care to him/her. 2. The party breached such duty 3. The party caused him/her harm, which he/she complained of and; 4. S/he must show that the damage suffered is not too remote from the party's negligence. In this essay, I will examine whether these victims will have a successful claim/s towards the other party based on the elements listed. Lin The accident started from Martin knocked Lin off his bike without paying proper attention on his way back to work, which broke Lin's legs and arms. In order to claim the damage, Lin has to impose a duty under negligence, we shall follow the three-fold test laid down by the House of Lords in Caparo Industries plc v Dickman.2 "(i) ...read more.

Hence, the recurrence of cancer is the extent of it. Therefore, Lin should have a claim for the recurrence of cancer based on the "thin skull" rule. However, the possibility of reactivation of cancer should also be considered. If there was originally very high chance of reactivation, even without the neck fracture, the court will probably not allow the claim. As the chance of reactivation of cancer is high and presence before the accident, there is no direct causation of the accident. A helpful case to this is Gregg v Scott6. A doctor's misdiagnosis, causing the chance of recovery of cancer of a patient drop from 42% to 25%. However, 42% is considered low chances in law, meaning that the patient will probably not recover even if the doctor is careful. Hence, the doctor's negligence is not the effective cause in this sense. This case demonstrates the principle that if the chance of reactivation is already high (usually >50%), without the neck fracture, the plaintiff will be considered failing in proving on the balance of probabilities. The negligence would therefore, not an effective cause of the damage because it is too remote. ...read more.