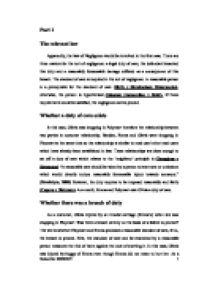 Negligence law case analysis. As a customer, Olivia injured by an invalid carriage (Emmas) when she was shopping in Ploymart. Was there a breach of duty on the basis of a failure to protect?

Part 1 The relevant law Apparently, the law of Negligence would be involved in the first case. There are three matters for the tort of negligence: a legal duty of care, the defendant breached this duty and a reasonably foreseeable damage suffered as a consequence of this breach. The standard of care is required in the tort of negligence. A reasonable person is a prerequisite for the standard of care (Blyth v Birmingham Waterworks), otherwise, the person is hypothetical (Glasgow Corporation v Muir). If these requirements could be satisfied, the negligence can be proved. Whether a duty of care exists In this case, Olivia was shopping in Polymart therefore the relationship between two parties is customer relationship. Besides, Emma and Olivia were shopping in Ploymart at the same time so the relationship is similar to road user/ other road users which have already been established in law. These relationships are close enough to set off a duty of care which relates to the 'neighbour' principle in (Donoghue v Stevenson) -"a reasonable care should be taken by a person to avert acts or omissions which would directly induce reasonably foreseeable injury towards someone." (Maclntyre, 2008) However, the duty requires to be imposed reasonably and fairly (Caparo v Dickman). As a result, Emma and Polymart owe Olivia a duty of care. Whether there was a breach of duty As a customer, Olivia injured by an invalid carriage (Emma's) ...read more.

However, even though the action of Emma was accidental but she did not master driving skills and did not brake. As a result, Emma would be primarily liable for the injury of Olivia and Ploymart shall assume the joint liability. In addition, Emma has to pay the claim by herself since "Invalid carriages do not have to be insured and Emma's carriage wasn't insured". Part 2 The relevant law First of all, the relevant law is the Contract. In this case, the buyer (Tom& Megan) made a payment which could be called the "price" but the subject matter of the contract was a house which is an interest in land. House could not be regarded as goods. (Maclntyre, 2008) The case did not meet the requirements hence we cannot say there was a contract of sale of goods (Sale of Goods Act (SGA) 1979). Nonetheless, there was a contract of sale of land between buyer (Tom& Megan) and seller (James& Alice), and the buyer could be protected by Sale of Land Act 1962. Moreover, due to the fact that there was a legally binding agreement between James& Alice and estate agent, the agreement is bilateral where there are exchange of promises in the offer and acceptance. Hence there was another contract between James& Alice and estate agent (Unfair Contract Terms Act 1977). The first arguable issue between sellers and buyers As mentioned above, there was a contractual relationship because Tom& Megan bought a house from James& Alice though estate agent. ...read more.

The fact is they settled the invoice exceed the contract requirement of a week because of carelessness. Advise for Tom and Megan As we have already analysed, the possibility of misrepresentation was existed in the contract. Moreover, the buyer entered into the contract due to the induction of misrepresentation and might lose �20,000 if they sell the house. A finding of misrepresentation could be regarded as breach of contract and allows for a remedy from breaching party. In this case, if the negligent or fraudulent misrepresentation can be proved, Tom& Megan have rights to sue James& Alice to "rescind the contract and claim damages which will be assessed on a tort basis" (Maclntyre, 2008). In addition, Tom& Megan also could ask the court to force James& Alice to bear the maintenance of the garden or pay the cost of repairs. Advise for James and Alice As presented in the section 2 (25) of Unfair Contract Terms Act 1977, "Liability for other loss or damage in negligence can be excluded but only where the reasonableness test is satisfied." In the second case, since James& Alice had not settled the invoice in time because of carelessness, therefore they should comply with the contract requirement to pay more fees. However, there are other advices for James& Alice. In order to minimize loss, they could pay 1.5% of the selling price first and renegotiate with estate agent about the concrete fees (between 1.5% and 3%). As a last resort, they must abide by the contract and pay 3% of selling price to estate agent. ...read more.