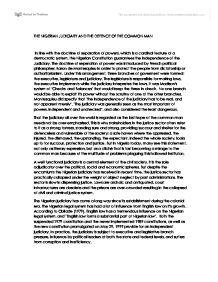 Nigerian Judiciary and the defence of the common man

THE NIGERIAN JUDICIARY AND THE DEFENCE OF THE COMMON MAN In line with the doctrine of separation of powers, which is a cardinal feature of a democratic system, the Nigerian Constitution guarantees the independence of the Judiciary. The doctrine of seperation of power was introduced by French political philosopher, Baron de Montesquieu in order to protect the people from dictatorship or authoritarianism. Under this arrangement, three branches of goverment were formed: the executive, legislature and judiciary. The legislature is responsible for making laws, the executive implements while the judiciary interpretes the laws. It was Madison's system of "Checks and Balances" that would keep the three in check. No one branch would be able to exploit it's power without the scrutiny of one of the other branches. Montesquieu did specify that "the independence of the judiciary has to be real, and not apparent merely". "The judiciary was generally seen as the most important of powers, independent and unchecked", and also considered the least dangerous. That the judiciary all over the world is regarded as the last hope of the common man needs not be over-emphasised. This is why stakeholders in the justice sector often refer to it as a strong fortress, standing sure and strong, providing succour and shelter for the defenceless and vulnerable of the society; a safe haven where the oppressed, the injured, the dismayed, the upstanding, the expectant, indeed the whole society, looks up to for succour, protection and justice. But in Nigeria today, many see this statement, not only as literary expression, but as a clich� that is fast becoming a mirage to the common man because of the multitude of problems plaguing this hallowed instituton. ...read more.

Nigerians gullibly swallowed all the lofty promises and with high hopes, prepared themselves for the ride to the promised land. Alas, the implementation of the sweet promises proved not to only be an ardous task, but an impossible one. The first indication that the status quo was not about to change in the judicial system was the failure of the Justice Chukwudifu Oputa panel which was set up to investigate and resolve cases of human rights abuse during the military era. Victims attended the hearings and passionately presented their cases. But the various individuals, especially the ex military rulers indicted, snubbed the panel and refused to answer the summons. The government did nothing to make these people respect the panel which really undermined the credibility of the panel. Obviously, the hands of the government was tied because some of the indicted individuals bankrolled the campaign of the sitting president. At the end of the hearings, the renowned Justice Oputa and his colleagues made recommendations to the government which it contemptuously ignored and failed to implement till this day. Another case that comes to mind is that of the 'Apo 6' victims. These were 5 young men and a lady who were brutally murdered in cold blood on 7th june,2005 on the orders of a ruthless senior poice officer, Assistant commissioner of police Ibrahim Danjuma. At the time, the case generated much controversy and outrage. The police officers tried to lie by labelling the innocent victims armed robbers. These accusations were unanimously rejected by people who knew these young men as honest men engaged in legitimate business. Owing to the furore generated by the massacre, the federal government under former president Olusegun Obasanjo set up a judicial panel of inquiry which investigated the circumstances leading to the death of the victims. ...read more.

Lately, Nigeria once again made mockery of itself in the international community following the mayhem that occured in some northern states during the crash of the radical islamic sect, Boko harem with security agencies. The leader of the sect was captured and killed in police custody igniting widespread international condemnation. It is indeed, very unfortunate and distressing that in the year 2009, when less endowed countries are making progress and undergoing widespread advancement, Nigeria is still indulging in extrajudicial killing. No matter the magnitude of the crime committed, every individual is entitled to fair hearing. All accused remain innocent until convicted by a legitimate court of law. This is a basic knowlege and for the police force to disregard that shows that we still have a very long wy to go as a country. In conclusion, the fate of the common man in the hands of the Nigerian judiciary is bleak and forlorn. Infact, there is no justice for the common man in our present judicial system. The judicial system needs to be completely overhauled for it to function in line with international standards. Of course, reforming the judicial system cannot be effective without overhauling the police force which is in an even worse shape. We have to purge this country of corruption for us to make any tangible progress in this regard. We need responsible, honest and committed leadership and only a credible electoral process can produce that. Only a responsible and selfless government can implement people-oriented reforms which will impact on the various institutions in this country including the judiciary so that they can function in line with the prevailing standards in developed countries. Till then, the fate of the common man in this country remains in God's hands. ...read more.