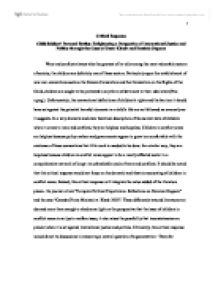 Critical Response Child Soldiers' Personal Battles: Enlightening a Perspective of International Justice and Politics through the Cases of Omar Khadr and Dominic Ongwen Wars and conflicts always take the greatest of its tolls among the most vulnerable sectors of society; the children are definitely one of these sectors. Particularly upon the establishment of new war conventions such as the Geneva Convention and the Convention on the Rights of the Child, children are sought to be protected in any form of detriment to their ideal state (Pais n.pag.). Unfortunately, the conventional definitions of children's rights and the barriers it should have set against the potential harmful elements in a child's life are not followed as reverently as it suggests. In a very dramatic and even theatrical description of the current state of children when it comes to wars and conflicts, they are helpless and hopeless. Children in conflict zones are helpless because policy makers and governments appear to grow too comfortable with the existence of these conventions that little work is needed to be done. In a similar way, they are hopeless because children in conflict zones appear to be a mostly affected sector in a comprehensive network of loops- an unbreakable cycle of wars and conflicts. ...read more.

The Canadian government mobilized its Canadian Security Intelligence Services (CSIS) and Foreign Intelligence Division of the Department of Foreign Affairs and International Trade (DFAIT) to aid American intelligence and counterterrorism agencies in getting information from Khadr (Canada (Prime Mnisiter) v. Khadr). The decision of the Supreme Court of Canada found ground on the inhumane treatment received by Khadr even if he is a minor in a conflict area, which entitles him to access his rights as a child and as a human as stated in international conventions. The comprehensive journal article written by Erin Baines (2009) captured the same picture on how children are involved with conflicts and how they become excluded from the international laws. His characterization of Dominic Ongwen, a high-ranking officer of the Lord's Resistance Army or LRA, systematically illustrated the making of a child soldier. From recruitment to combat, child soldiers are secluded from the people that he grew up with and are continuously trained to obey without questions (Baines 170). Dominic Ongwen grew up on this environment. As a result, he became one of the most decorated LRA fighters that soon yielded him higher positions in the rebel group. ...read more.

The lived realities of Dominic Ongwen presented by Baines in his article justify this stand of the United Nations through the details of the process on how children are victimized by conflicts and how exiting systems can victimize them more. Finally, this critical response would like to stress that articles such as that provided by Erin Baines are necessary in insuring that victims such as Omar Khadr and Dominic Ongwen have a fair chance of being reintegrated to the normal world and excluded from the world of violence. The decision to state that the detention of Omar Khadr is unconstitutional is a victory for all child soldiers (Hajjar n.pag.). In the same way, this also marks the start of a possible paradigm shift with the way international tribunals see and respect the children in conflict zones (Hajjar n.pag.). Considering all of these points, it is just logical to answer the central question of the argument that indeed children rights evolve in line with international justice and politics. Even if it is not commendable, the cases of Dominic Ongwen and Omar Khadr proved how international justice and politics could go in the way of promoting one of the most vital conventions of humanity- human rights. ...read more.