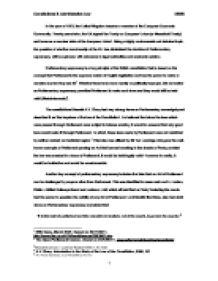 Parliamentary Supremacy - the question of whether membership of the EU has diminished the doctrine of Parliamentary supremacy, will be explored, with reference to legal authorities and academic opinion.

In the year of 1973, the United Kingdom became a member of the European Economic Community. Twenty years later, the UK signed the Treaty on European Union (or Maastricht Treaty) and became a member state of the European Union1[MD1]. Being a highly controversial and debated topic, the question of whether membership of the EU has diminished the doctrine of Parliamentary supremacy, will be explored, with reference to legal authorities and academic opinion. Parliamentary supremacy is a key principle of the British constitution that is based on the concept that Parliament is the supreme maker of English legislation and has the power to make or unmake any law they see fit.2 Whether these laws were morally or politically improper, did not matter as Parliamentary supremacy permitted Parliament to make such laws and they would still be held valid (Madzimbamuto)3. The constitutional theorist A.V. Dicey had very strong views on Parliamentary sovereignty and described it as 'the keystone of the law of the Constitution'. He believed that since the laws which were passed through Parliament were subject to intense scrutiny, it would be ensured that only good laws would make it through Parliament. In effect, these laws made by Parliament were not restricted by neither content nor territorial region.4 This idea was utilised by Sir Ivor Jennings who gave the well-known example of Parliament passing an Act that banned smoking in the streets of Paris; provided the law ...read more.

The EU today is governed by two treaties known as the TEU and TFEU which are also primary sources of EU legislation. The EU comprises of two doctrines: The doctrine of direct effect, which[MD4] simply states that individuals can rely on rights and obligations in their national courts, and the doctrine of primacy of EU Law over national law. This doctrine purposes to ensure effectiveness and achievement of the aims of the Treaties, but specifically looks to ensure uniformity of the application of law in all the member states. This however, poses as a threat to the UK as ideally, Parliament ought to be the supreme law maker of the UK. This doctrine immediately conflicts with Parliamentary supremacy and has been demonstrated throughout multiple cases in the UK courts. Although the Treaty of Rome does not directly specify supremacy, the EU Courts had already declared their supremacy long before the UK became a member state. It was implicated that Community Law overrides any national law that conflicted with it. This concept was first decreed in the case of Costa v ENEL7 where it was held that[MD5]: "The EEC Treaty has created its own legal system which...became an integral part of the legal systems of the Member States and which their courts are bound to apply." This was further supported in the case of Simmenthal, which held that every national court at any level was obliged to give ...read more.

The ECA in its entirety attempts to, and successfully contravenes Dicey's theory on Parliamentary supremacy as: > No longer can Parliament make extra-territorial laws > The courts and other 'bodies' now have power to challenge an Act of Parliament if it does not coincide with EU law and, > In effect, the successors of Parliament have been bound in regards to making laws how it wishes; this is because any future laws to be passed will be subject to the primacy of EU law. However, if Parliament ever decided to repeal the ECA, it is possible and quite likely that they would have it put through a referendum, perhaps to secure public interest and public order. In conclusion, there is indeed great truth in the statement that membership of the EU has curtailed the supremacy of Parliament; however, it is quite arguable that the power continues to remain in the hands of Parliament. Theoretically, the UK may withdraw from the EU at any given time. The EU merely has limited legislative competence which is extended to only certain aspects of UK law, making its primacy easily reversible. Even if there were to be an Act of Parliament stating that the UK may never withdraw from the EU, it would not pose as a threat to the UK because Parliament may swiftly repeal this law at any given time-this is the power upheld by the doctrine of Parliamentary supremacy which will continue to live on as long as the British constitution permits it[MD7]. ...read more.

An average essay on parliamentary sovereignty.

The student may have wished to have included the fact that external bodies make UK law: see e.g. MacMahon v DES [1983] (EEC Treaty on free movement of workers was applied in preference to UK regulations, which prevented the claimant from obtaining an education grant) and Webb v EMO Air Cargo [1994].

An Act of Parliament incompatible with any requirement of EU law can and must be declared invalid: see e.g. Bossa v Nordsress Ltd [1998].

Conversely, EC law is limited to certain fields: trade, employment, agriculture etc., and has limited concern with criminal and family law, for instance.