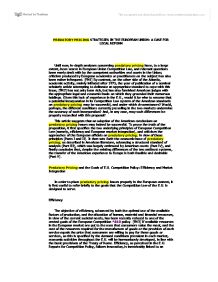 Predatory pricing strategies in the European union: A case for legal reform.

PREDATORY PRICING STRATEGIES IN THE EUROPEAN UNION: A CASE FOR LEGAL REFORM Until now, in-depth analyses concerning predatory pricing have, to a large extent, been scarce in European Union Competition Law, and relevant questions been rarely dealt with by the competent authorities and courts in the Union; criticism produced by European academics or practitioners on the subject has also been rather infrequent. [FN1] By contrast, on the other side of the Atlantic, academic activity, mainly initiated after 1975, the year of publication of a seminal scholarly article attempting to delineate an appropriate standard to cope with this issue, [FN2] has not only been rich, but has also furnished American judges with the appropriate legal and economic basis on which they grounded their numerous holdings. Given this lack of experience in the E.U., would it be wise to assume that a potential incorporation in its Competition Law system of the American standards on predatory pricing may be successful, and under which circumstances? Would, perhaps, the different conditions currently prevailing in the two markets undermine the accuracy of such incorporation? And, in any case, may such differences be properly reconciled with this proposal? This article suggests that an adoption of the American conclusions on predatory pricing issues may indeed be successful. To prove the truth of the proposition, it first specifies the two underlying principles of European Competition Law (namely, efficiency and European market integration), and criticises the approaches of the European officials on predatory pricing, in view of those principles (Parts I and II). It then sets forth the economic base of predatory pricing, as described in American literature, advancing a structural standard of analysis (Part III), which was largely embraced by American courts (Part IV), and finally concludes that, despite the existing differences of the two antitrust systems, the transfer of the American experience to Europe is both feasible and desirable (Part V). ...read more.

or that it will use its abundant financial resources, power and competitive advantages, to exclude from the market its equally or more efficient competitors, thus damaging competition. Solely relying on intent normally does not give any hint whether the prices imposed by an alleged predator are above or below its average total costs, nor that there is a likelihood of the latter recouping its losses. On the other hand, the basic principle that preservation of competition, and not of individual competitors, is of antitrust concern, is likewise often repeated; a practice therefore merely excluding a single competitor, perhaps because it is less efficient, would not give any hint as to whether a predatory claim may be valid or not, unless there is a general adverse impact on competition. [FN69] *223 A Proposed Rule for European Predatory Pricing Controversies: The Two- tier American Approach The new approach In Part II of this article it was noted that E.U. officials and judges alike examine predatory pricing controversies under Article 86 and admit that only dominant, usually multi-market, firms may indulge in this kind of behaviour. They base their decisions, however, on a pure cost-based rule, thus disregarding the inter-temporal character of such behaviour, or focus on subjective intent evidence, without examining whether the allegedly predatory schemes at stake involve below-cost pricing, or have the potential of restricting competition. They even regard above-cost pricing by dominant firms as exclusionary, although the latter may drive only less efficient firms from the market. As was seen, however, such approaches may discourage legitimate competitive behaviour on the basis of efficiency, or, at least, deprive consumers of short-term low pricing, even should this be below a firm's cost, thus impairing consumer welfare. It is thus reasonable to conclude that the European holdings are at odds with the announcements of competition law objectives, as described in the annual Competition Reports of the Commission. ...read more.

60 above, at 1402, focusing on the increase of the litigation costs as result of a use of an intent criterion, that may also undermine the accuracy of the decisions. FN69. "Competition is a ruthless process. A firm that reduces cost and expands sales injures rivals--sometimes fatally ... These injuries are byproducts of vigorous competition, and the antitrust laws are not balm for rivals' wounds. The antitrust laws are for the benefit of competition, not competitors." Morgan, n. 48 above, at 1359. See also Everton, n. 19 above, at 12-14, on the effects of price competition on small market operators. FN70. See nn. 3 to 6 above and accompanying text. FN71. See above, second and fourth sub-sections of Part III. By subsequently shifting the proof of analysis to defendants, this test would also give the latter the opportunity to establish the level of their economic costs, as opposed to accounting costs, which are usually set upwards in an effort to minimise taxes. See Adams, n. 1 above, at 26. FN72. See n. 6 above and accompanying text. See also Phillips, "Who Gains From Predatory Pricing", 158 OECD Observer 20, 22 (1989), noting that aggressive price cuts may foster European integration, and hence a relaxed view towards predatory pricing should be welcome. FN73. See n. 16 above. FN74. Of course, the Commission noted that those imports were of a complementary nature, and not a fully competitive alternative; however, they were sufficient to undermine the recoupment efforts of British Sugar: ibid., at 52. FN75. See nn. 61 to 65 above and accompanying text. FN76. See n. 69 above and accompanying text. FN77. See British Sugar, n. 16 above, at 57. FN78. See Tetra Pak, n. 15 above, at 9, 13, 15, 32, 33. FN79. ibid., at 19, 20. FN80. ibid., at 22-30, 32. FN81. ibid., at 38. FN82. See AKZO, Commission's decision, n. 13 above, at 18, court's decision at 3449, 3452. FN83. Commission's decision at 23. FN84. See Hilti, n. 13 above, at 37. ...read more.