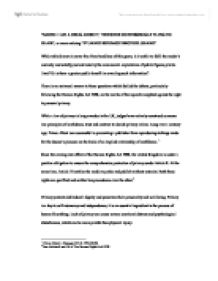 'NAOMI: I AM A DRUG ADDICT', 'MINISTER CONFESSES GAY FLING TO BLAIR', or more enticing 'TV JAMIE BONDAGE BROTHEL SHAME' While tabloid news is never free from headlines of this genre, is it unfair to fulfil the reader's curiosity and satisfy prurient taste by the commercial exploitation of public figures private lives? Or is there a greater public benefit in revealing such information? There is no universal answer to these questions which fuelled the debate, particularly following the Human Rights Act 1998, on the merits of free speech weighted against the right to personal privacy. While a law of privacy is long overdue in the UK, judges have actively construed common law principles of confidence, trust and contract to decide privacy claims. Long over a century ago, Prince Albert was successful in preventing a publisher from reproducing etchings made for the Queen's pleasure on the basis of an implied relationship of confidence. 1 Since the coming into effect of the Human Rights Act 1998, the United Kingdom is under a positive obligation to ensure the comprehensive protection of privacy under Article 8. At the same time, Article 10 entitles the media to probe and publish without restraint. Both these rights are qualified and neither has precedence over the other.2 Privacy protects individuals' dignity and preserves their personality and well-being. Privacy is a key to self autonomy and independence; it is an essential ingredient in the process of human flourishing. ...read more.

The common law, as it was, seemed to be tailored to serve the class system in Britain; where the idea of clearing one's name is linked to an age where dignity and status where determined by libel cases. Libel was a measure of gentry and nobility and not for punishing erroneous publishers; thus, cases involving allegations of cheating at cards and shooting foxes came before the court. Judges helped solidify these presumptions by asserting that any slur on an individual's character must be false and maliciously published unless proved otherwise by the defendant. 16 Traditionally, only privileged occasions were allowed to pass without having to be proven true; such as debates in Parliament or sworn evidence in court. A requirement of 'duty' to publish was established in Adam v Ward, which is triggered where the publisher has a legal, moral or social duty to publish the statement and the audience has a reciprocal interest to receive it.17 However, in Blackshaw, the Court held that 'no privilege attaches yet to a statement on a matter of public interest believed by the publisher to be true and in relation to which he has exercised reasonable care", and the concept of 'duty' has been narrowed down to cases where urgency is so great that it warrants communicating, for example, in times of danger to the public from a suspected terrorist or the distribution of contaminated food or drugs. ...read more.

Mohamed Jameel, a Saudi billionaire businessman with reputation in the UK, was one of the names listed in the article. He has filed a defamation case against the publisher, claiming that the article accused him of having ties to terrorists. The House of Lords rejected his claims and thought that the article was exactly the kind of investigative journalism that Reynolds privilege had been devised to protect. They maintained that so long as the article, published responsibly, marks a serious contribution to a subject of considerable importance and the defamatory words are justifiable, the public interest test is satisfied. The Lords decision in Jameel marks a new era for the Reynolds defence. However, Baroness Hale of Richmond warned that public interest does not include "vapid tittle-tattle about the activities of footballers' wives and girlfriends (that) interests large sections of the public." As such, there is no significant shift with respect to celebrity journalism, as Michael Kahne explained who recently lost a libel case in London brought by Kate Hudson over an article suggesting she had an eating disorder. 25 The truth is that the media does not care as much about improving reports on public figures exercising their official functions, so long as they cover what they do in bed. When it comes to privacy, the courts has recently been more inclined to uphold privacy rights over speech while in defamation, following Jameel, the question of public interest has to be heavily weighted. ...read more.