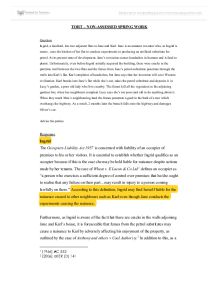 TORT - NON-ASSESSED SPRING WORK Question Ingrid, a landlord, lets two adjacent flats to Jane and Karl. Jane is an amateur inventor who, as Ingrid is aware , uses the kitchen of her flat to conduct experiments in producing an artificial substitute for petrol. At its present state of development, Jane's invention causes headaches in humans and is fatal to plants. Unfortunately, even before Ingrid initially acquired the building, there were cracks in the partition wall between the two flats and the fumes from Jane's petrol-substitute penetrate through the walls into Karl's flat. Karl complains of headaches, but Jane says that her invention will save Western civilisation. Karl breaks into Jane's flat while she's out, takes the petrol substitute and deposits it in Lucy's garden, a poor old lady who lives nearby. The fumes kill all the vegetation in the adjoining gardens but, when her neighbours complain Lucy says she's too poor and old to do anything about it. When they reach Max's neighbouring land the fumes penetrate a gash in the bark of a tree which overhangs the highway. As a result, 2 months later the branch falls onto the highway and damages Oliver's car. Advise the parties Response Ingrid The Occupiers Liability Act 1957 is concerned with liability of an occupier of premises to his or her visitors. It is essential to establish whether Ingrid qualifies as an occupier because if this is the case she may be held liable for nuisance despite actions made by her tenants. ...read more.

Nonetheless, Lord Goff in Cambridge Water Co. v. Eastern Counties Leather Co.9 states that "the storage of substantial quantities of chemicals on industrial premises should be regarded as an almost classic case of non-natural use..." Jane's use of petroleum substitutes can be considered unnatural use of land and hence her claim to save Western civilisation may be disregarded. It is possible for Jane to argue that it was Ingrid's duty to ensure that the cracks in the wall were fixed (Malone v Laskey10) or at least inform her of these cracks so that she could take the necessary precautions to ensure that the fumes would not affect Karl. This defence may reduce Jane's liability for private nuisance. Additionally Per Lord Wright in Sedliegh Denfield v O'Callaghan11 "Liability for nuisance is not, at least in modern law, a strict or absolute liability." Hence on this account Jane's liability for private nuisance is likely to be reduced. Karl Karl's act of breaking into Jane's flat while she was out constitutes trespass to land. This is because of the fact that it was an intentional, unlawful entry which directly interfered with the land in Jane's possession (Perera v Andiyar) In fact, Karl is liable for trespass to land on two accounts as he also went into Lucy's garden without her permission to place the petrol substitutes. ...read more.

Overall, the essay is good in places but would benefit from a tighter structure. The distinction between private and public nuisance, and the rule in Rylands v Fletcher should be made more clear.
Also, the essay overuses direct quotes from judgments. These do not add to the depth of the essay.
3 Stars.