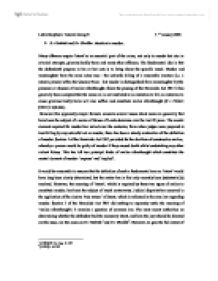 Lettie Smythers: Tutorial Group 9 3rd January 2003 > R v Nedrick and R v Woollin: intention in murder. Many offences require 'intent' as an essential part of the crime, not only in murder but also in criminal attempts, grievous bodily harm and many other offences. The fundamental idea is that the defendant's purpose in his or her acts is to bring about the specific result. Murder and manslaughter have the same actus reus - the unlawful killing of a reasonable creature (i.e. a natural person) within the Queens Peace - but murder is distinguished from manslaughter by the presence or absence of malice aforethought. Since the passing of the Homicide Act 1957 it has generally been accepted that the mens rea is not restricted to an intention to kill; an intention to cause grievous bodily harm will also suffice and constitute malice aforethought (R v Vickers [1957] 2 QB 664). However this apparently simple formula conceals several issues about mens rea generally that have been the subject of a series of House of Lords decisions over the last 20 years. The mental element required for murder has varied over the centuries, from when judges were prepared to treat killing by any unlawful act as murder, there has been a steady contraction of the definition of murder. Section 1 of the Homicide Act 1957 provided for the abolition of constructive malice, whereby a person would be guilty of murder if they caused death whilst undertaking any other violent felony. ...read more.

In the Court of Appeal, Lord Lane (the Lord Chief Justice), specifically addressing the Moloney guidelines, said that directions to juries should not merely refer to the natural consequences of the accused's voluntary act, but should also refer to the probable consequences of his act. When the case came before the House of Lords, however, Lord Scarman advised that Lord Lane's reformulation of the Moloney guidelines should not be used by trial judges when summing up to a jury because 'their elaborate structure [could] create difficulty'. Instead, Lord Scarman suggested that: "guidelines should avoid generalisation so far as is possible and encourage the jury to exercise their common sense in reaching what is their decision on the facts".7 Lord Scarman felt that jurors should receive specific guidance on the issue of probability, and should be informed that the greater the probability of a consequence occurring, the more likely it is that the consequence was foreseen, and thus the greater probability that the consequence was intended. In Moloney Lord Bridge ascertained that the jury would be entitled to infer intention only when the accused foresaw the probability of the result occurring as a 'moral certainty' or 'little short of overwhelming'. However, in Hancock and Shankland the Court of Appeal spoke of the 'high likelihood' of the consequence occurring. Lord Bridge in Moloney suggested that the jury should be as whether the accused foresaw the consequence as a 'natural' result of his actions whereas Lord Lane in Hancock retreated from this position - did the defendant appreciate that there was a high degree of likelihood of death or serious injury? ...read more.

Following Professor J.C. Smith's argument in his article, 'A Note on Intention'11, this definition has been altered. The 'latest' definition of intention, as endorsed by the Law Commission, is now to be found in the Draft Criminal Law Bill clause 14(1)(6), which states that intention can be attributed to a person 'although it is not his purpose to cause it, he knows that it would occur in the ordinary course of events if he were to succeed in his purpose of causing some other result'. If this was enacted, then statute would supersede the judicial definition of intention. Until such times as the meaning of intention is enacted in a statute, then the law at present is as stated in Nedrick. The jury will retain its central role, deciding in each case whether a defendant intended to kill or intended to cause grievous bodily harm, regardless of whether the legal definition of intention is settled by the judiciary or the legislature. Nedrick makes it clear that there is a need to prove intention and that the test is a subjective one. "Intention", however, remains undefined and is to be determined by the jury through the operation of this subjective test. 1 [1986] 83 Cr. App. R. 267 2 [1999] 1 AC 82 3 [1985] 2 All ER 41 4 [1985] 1 All ER 1025 5 pp. 1036j-1037a 6 [1986] 1 All ER 641 7 p 615 g 8 [1986] 3 All ER 1 9 Lord Lane at p.1028 10 [1998] 4 All ER 103 11 [1990] Crim LR 85 ...read more.