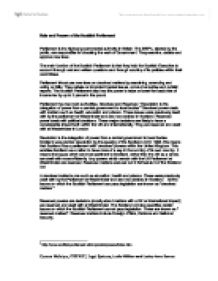 Role and Powers of the Scottish Parliament

Role and Powers of the Scottish Parliament Parliament is the highest governmental authority in Britain. The MSP's, elected by the public, are responsible for checking the work of Government. They examine, debate and approve new laws. The main function of the Scottish Parliament is that they hold the Scottish Executive to account through oral and written questions and through scrutiny of its policies within their committees. Parliament introduces new laws on devolved matters by examining, amending and voting on Bills. They debate on important topical issues, conduct enquiries and publish reports. The Scottish Parliament also has the power to raise or lower the basic rate of income tax by up to 3 pence in the pound. Parliament has two main authorities, Devolved and Reserved. "Devolution is the delegation of power from a central government to local bodies"1 Devolved power deals with matters such as health, education and prisons. These issues were previously dealt with by the parliament at Westminster and are now decided in Scotland. Reserved power deals with political decisions. These major decisions are likely to have a considerable impact both within the UK and internationally. They are reserved and dealt with at Westminster in London. Devolution is the delegation of power from a central government to local bodies. ...read more.

For entrants in academic year 2006-07, the endowment fee was set at �2,289 for the time of graduation. Fortunately not all students have to pay the GE fee. There are a number of exemptions, including lone parents, those who are in receipt of the Disabled Students' Allowance at some point during their course, those who are studying at a UK institution outside Scotland, students who come to study in Scotland from elsewhere in the UK or from all countries out with the EU, or those who study part-time. Overall, almost 50% of graduates are exempt under these criteria. This wholly discriminates against Scottish students who study full time. This law is allowing our system to be abused by students coming to Scotland to study from overseas. After all were the shoe on the other foot Scottish students would not be exempt and in many cases would be charged extra because they were not a resident of the country they are studying in. This law discourages many school leavers from furthering their education at university because they either cannot afford it or do not want to leave with a high student debt. The next group of students who will, under current arrangements, have to pay the GE fee are those who have successfully completed their course on or after 1 April 2007. ...read more.

These committees are created specifically to deal with the Bill they normally consist of 18-50 MPs and reflect the position of the parties represented in the House of Commons. The Bill is then scrupulously inspected and any amendments are made. The Report Stage involves a review of all amendments made, if any, during the Committee Stage. At this stage all members have the opportunity to debate the amendments and pass the bill back to the original house proposing their changes, eventually to create an agreed version. This can take some time as the bill can be changed and passed around many times. At the Third Reading the House examines the final edition of the Bill. It is then discussed and debated and a vote is taken to decide whether the Bill will become a statute. At this point the Bill is then passed on to the House of Lords where the whole procedure is then repeated. The House of Lords can make further amendments, which must then go back to be agreed, to the Bill before passing it on to the Crown. The final stage of a Bill is where the Crown must officially agree to the Bill in order for it to become a Statute and pass into law. In this day and age it is unlikely that the Bill will be passed on to the Crown for Royal Assent except in extraordinary circumstances. ...read more.