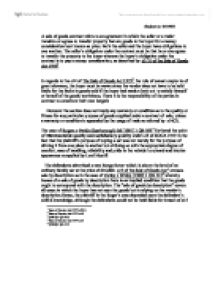 Student no: 0507943 A sale of goods contract refers to an agreement in which the seller or a trader transfers or agrees to transfer property that are goods to the buyer for a money consideration best known as price. Both the seller and the buyer have obligations to one another. The seller's obligation under the contract must be that he or she agrees to transfer the property to the buyer whereas the buyer's obligation under the contract is to pay a money consideration, as described by s2 (1) of the Sale of Goods Act 19791 In regards to the s14 of The Sale of Goods Act 19792, the rule of caveat emptor is of great relevance, the buyer must be aware since the vendor does not have to be held liable for the faults in goods sold if the buyer had made a look out to satisfy himself or herself of the goods worthiness. There it is the responsibility of the parties in contract to constitute their own bargain However the section does not imply any warranty or condition as to the quality or fitness for any particular purpose of goods supplied under a contract of sale, unless a warranty or condition is appended by the usage of trade as referred by s14(3). ...read more.

a right to claim for damages or rescind the contract above that an oral statement constitute an actionable misrepresentation when it misleads a written representation. Such a situation was exemplified in Curtis v Chemical Cleaning and Dyeing Co Ltd[1951]1 KB 80511 when a store assistant accepted a dress from a consumer for cleaning but innocently misrepresented that the exemption clause on the receipt included covering for beads and sequins although it included all materials damage. s.14(2) of the Sale Of Goods Act 1979 tend to protect the seller where the defects of the goods complained of had been specifically drawn to the buyers attention before the contract was sealed SOGA s.14(2c)(a).It is the responsibility of the seller to be specific when drawing the defects of the good to the buyers attention, the mere fact of mentioning that the goods have defects is not sufficient, as it was demonstrated in the case of Bartlett v Sidney Marcus [1965] 2 All ER 75312,where Lord Denning of the court of Appeal held that the implied conditions under s14(1) and (2) of the Sale Of Goods Act 1893 that the car was fit reasonably to be driven along the road and that it was of merchantable quality were applicable although there was no evidence whatsoever to support the findings of the County Court Judge that there were vivid breaches of the implied condition.Hence,the buyer failed to claim damages under s.14(2). ...read more.