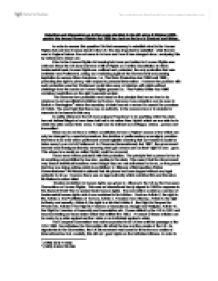 Selecting and discussing up to five cases decided in the UK since 2 October 2000, explain the impact Human Rights Act 1998 has had on the law in England and Wales.

Selecting and discussing up to five cases decided in the UK since 2 October 2000, explain the impact Human Rights Act 1998 has had on the law in England and Wales. In order to answer this question it is first necessary to establish what is the Human Rights Act and how it came about In the UK. It is also important to establish what the law was in England before the act came in to force and how it has changed since, analysing this by reference to Case Law. Prior to the Human Rights Act coming into force protection for Human Rights was minimal. Since the UK does not have a Bill of Rights or a written Constitution in which fundamental basic Human Rights are outlined and protected, the only protection that was available was Parliament, acting as a watchdog against the Government and passing legislation to secure citizen freedoms, i.e. The Data Protection Act 1984 and 1998, protecting the right to privacy with respect to personal information. However the problem with such protection was that Parliament could take away or interfere with rights without challenge from the courts on Human Rights grounds i.e. The Public Order Act 1986 contained restrictions on the right t peaceful protest. The Common law protection was based on the principle that we are free to do whatever is not specifically forbidden by the law. Common Law protection can be seen in Entick v Carrington1 where the secretary of state issued a warrant to search the premises of Entick. The court held that there was no authority in the common law or in statute for warrants to be issued in this way. In reality citizens in the UK have enjoyed 'freedoms' to do anything which the state has not defined illegal or have been told not to do rather then 'rights' which we are able to do which the state cannot take away. ...read more.

One important limitation to the Act is that the convention rights are only 'Vertically directly effective' meaning that they can only be enforced against the state in other words a Public Body and not 'Horizontally directly effective' enforceable against other individuals. S 6(1) It is unlawful for a public authority to act in a way which is incompatible with a convention right5. A public authority can include central and local government, the police, NHS etc. The meaning of a public authority was considered in Donoghue v Poplar Housing and Regeneration Community Association6 where the HOWL decided that a public authority could include a housing association, as by providing accommodation it was fulfilling the local authorities' statutory obligation. The courts have accepted that the convention does have a limited Horizontal effect. As in Douglas v Hello7 the legal proceedings were between private parties involving the breach of Article 8, their Right to Privacy. Douglas and Zeta-Jones claimed breach of the Article because photographs of their marriage were published in the Hello magazine without their prior authorisation. The court held that the convention was relevant to the case because of the HRA and they were entitled to damages. The Douglas case is very important as it shows the impact of the HRA as it shows how the Human Rights Acts Article 8 could protect the Right to Privacy and that the Act in certain circumstances can be used between private bodies increasing the Acts impact. The HRA has had considerable impact in relation to all its Articles, I will outline a few cases to demonstrate. The Act has considerable impact on both Civil and Criminal cases. The HRA has had some impact in relation to its Article 7. This Article prohibits retrospective criminal law and penalties. The article only applies where an applicant is found guilty of an offence. The provision also generally only applies to decisions or acts of public authorities taking place after the act has come into force. ...read more.

If a Court makes a declaration of incompatibility, it is up to Parliament to change the statute in order to remove the conflict with the Convention rights. If it is removed it is done via a fast track procedure which avoids the full parliamentary procedure. Section 3 (1) states that a declaration of incompatibility does not effect the validity of incompatible primary or secondary legislation where the primary legislation would prevent the removal of the incompatibility. Thus the sovereignty of Acts of Parliament is preserved and the courts in the UK unlike the US do not have the power to strike down legislative provisions that have been clearly sanctioned by Parliament. This provision had to be included in the Human Rights Bill by the Government in order for Parliament to approve it. The courts have the power to grant appropriate remedies to those whose convention rights have been violated. The Courts could award just satisfaction to the victim. Just satisfaction includes the power to award damages to compensate for pecuniary and non pecuniary loss suffered by the victim. The courts will not automatically grant damages for breach of convention rights. Although the fact that the Human Rights Act has had a major impact on the issue of Human Rights in the UK it has nevertheless failed to give the UK a bill of Rights because the Act is not by law entrenched and can be repealed by a future Act of Parliament. However the act does appear to be politically entrenched as it would be difficult to revoke as doing so would provoke public discontent. The intention behind the act was to strengthen the protection of individual rights in the UK and to provide better remedies where these rights were violated this I believe has been achieved. Governments in the past had refused to incorporate the convention into UK law before 1998, fearing a 'flood' of cases, which in fact has not materialised. It has affected different areas which were originally not foreseen. ...read more.