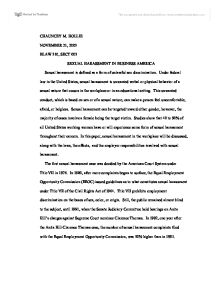 Furthermore, they were subject to repeated harassment upon their return to the workplace. In 1991, because of the need to strengthen the laws for sexual harassment under Title VII, Congress amended the Civil Rights Act. Sexual harassment victims can now recover compensatory damages for emotional pain and suffering. Punitive damages can also be collected if the plaintiff can prove that the employer acted with malice. Federal law recognizes two grounds for sexual harassment claims under Title VII. The first is Quid Pro Quo, which is a form of harassment where a person of authority demands sexual favors of a subordinate, in order to get or keep a job. The second type of sexual harassment is a hostile work environment. In a hostile work environment, victims are not threatened with termination, rather, they suffer repeated abuse by a supervisor or co-worker who engages in inappropriate sexual behavior. Sexual harassment can have adverse effects on the victim's emotional and physical well being. ...read more.