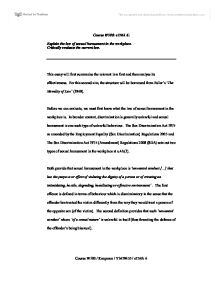 Explain what issues will be considered by the judge or magistrate. The question first requires an explanation of the various penal theories. With the factual foundations established it will then be possible to discuss how the various theories might be adapted by judges in sentencing. The question also calls for the writer's own opinions on sentencing. For the sake of economy, these will form the conclusion. The prevalence of any particular theory is variable through time and they are not mutually exclusive. There are five main theories each now discussed in turn. Retributive theory is concerned with the undeniably natural if often unattractive human characteristic of seeking requital in terms of a punishment which matches the harm done. Clearly this is very subjective. Such a 'just deserts' approach focuses on the past. Deterrence operates at two levels - individual and societal. For the former, the usual aim of the court will be to punish in such a way that the offender is persuaded not to repeat his offence. Relative to society generally, punishment is 'pour encourager les autres' - it is assumed we will take note of an individual's punishment and rationalise that behaving similarly is not worth the risk of the sanction. ...read more.