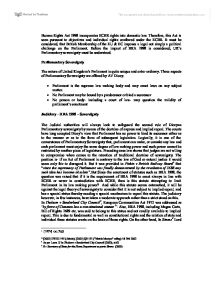 Since the enactment of statutes such as HRA 1998, the question was raised that if it is the requirement of HRA 1998 to enact always in line with ECHR or never in contradiction with ECHR, then is this statute attempting to limit Parliament in its law makin

Human Rights Act 1998 incorporates ECHR rights into domestic law. Therefore, this Act is seen pursuant to objectives and individual rights conferred under the ECHR. It must be considered, that British Membership of the EU & EC imposes a legal not simply a political challenge on the Parliament. Before the impact of HRA 1998 is considered; UK's Parliamentary sovereignty must be understood. Parliamentary Sovereignty The nature of United Kingdom's Parliament is quite unique and extra-ordinary. Three aspects of Parliamentary Sovereignty are offered by AV Dicey. * Parliament is the supreme law making body and may enact laws on any subject matter. * No Parliament may be bound by a predecessor or bind a successor * No person or body- including a court of law- may question the validity of parliament's enactment Judiciary - HRA 1998 - Sovereignty The Judicial authorities will always look to safeguard the second rule of Diceyan Parliamentary sovereignty by means of the doctrine of express and implied repeal. The courts have long accepted Dicey's view that Parliament has no power to bind its successor either as to the manner or as to the form of subsequent legislation. ...read more.

And while this statute seems entrenched, it will be against the legal theory of sovereignty to consider that it is not subject to implied repeal, and has a special status thereby needing a special mechanism to repeal this statute. The judiciary however, in few instances, have taken a moderate approach rather than a strict stand on this. In Thoburn v Sunderland City Council2, European Communities Act 1972 was addressed as 'by force of Common law a constitutional statute3'. Also, HRA 1998, including Magna Carta, Bill of Rights 1689 etc. was said to belong to this status and not readily available to implied repeal. This is due to fundamental as well as constitutional rights and the relation of state and individual these statutes create on the basis of those rights. On the other hand, In Simms4 Lord Hoffman confirmed, Parliament can, if it chooses to legislate contrary to HRA 1998, although with political limitations. It retains the theory that legally Parliament is sovereign. HRA 1998 - Statutory mechanism to preserve Sovereignty Section 3(1) ...read more.

In this way, Courts do not have to question the validity of an Act of Parliament and theological sovereignty is preserved. Declaration of Incompatibility was applied in A and others5, where S23 of the Anti-terrorism, Crime and Security Act 2001 was declared to incompatible with HRA 1998. In a furtherance of attempt to retain traditional Parliamentary Sovereignty, Section 6 requires all public authorities are to act in accordance with Convention rights. However, Section6 (2) (a)/ (b), provides; this requirement is not applicable if Public body have acted strictly under those domestic Primary and or subordinate legislation 'which cannot be read or given effect in a way which is compatible with the Convention rights'. Conclusion It is for a broader interest that while implied repeal rule still applies in relation to most statutes, it has been regarded by some as inapplicable to statutes or major constitutional importance. And so, far parliamentary sovereignty has been kept intact through statutory and common law mechanism. Especially, the judges has the scope for statutory interpretation and development of the common law in line with Convention rights as well as well within the line of HRA 1998. ...read more.