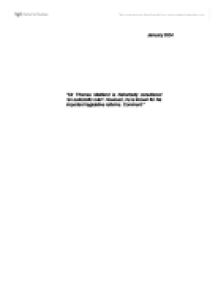 &quot;Sir Thomas Maitland is historically considered 'an autocratic ruler'. However, he is known for his important legislative reforms. Comment.&quot;

January 2004 "Sir Thomas Maitland is historically considered 'an autocratic ruler'. However, he is known for his important legislative reforms. Comment." INDEX Page Introduction 3 The Maitland Instructions (an overview of the legal overhaul) 3 Malta : A Colony in the grip of Plague 4 Reform of the Law Courts and Education System 5 Subsidiary legal reforms Commission of Piracy 7 Law of Organisation and Civil Procedure 7 Bankruptcy 8 Public Registry and the Hypothecary System 8 Mortmain Law 8 Sanctuary 8 Appeals to the Privy Council 8 Conclusion 9 ~ A lso known as 'King Tom', Sir Thomas Maitland is the only Mediterranean statesman in English history. He was the embodiment of England's power in the Mediterranean, and as his biographer1 upheld in the book "Sir Thomas Maitland"2, he was "...with one foot in Malta...and the other in Corfu, King Tom stood out as the visible embodiment of a Pax Brittanica. He bestrode the Mediterranean like a Colossus.". People living under his domain viewed him as a quarrelsome and ruthless governor, but in spite of this, with the passage of time and subsiding of feelings, a more objective analysis shows that Maitland was a man who, with consummate ability, laid the foundations of Malta's institutions, suppressed abuses and enacted reforms which only a capable, energetic person, who had dynamic energy and absolute fearlessness could effect. The Maitland Instructions; Lord Bathurst3, commented that "...since the Island of Malta and its Dependencies came under the protection and Dominion of His Majesty in the year 1800, no permanent or definite system has been laid down for their Government...". ...read more.

Later in 1822, the Halls were reduced to two in number in virtue of the Proclamation of the 25th of January of 1822. On judge sat in the Criminal Court without a jury in cases where the punishment provided by law does not exceed a fine of 100 scudi or imprisonment for three years. In other trials, the judges consisted of two, and in case of a stalemate, the Governor appointed three judges of members of the Supreme Court of Justice and, these, after consultation with the first two judges, proceeded to decide upon the sentence which was thereupon promulgated by one of the Criminal Judges in open Court. During any Criminal trial, torture was prohibited, and legislation made it impossible for the Police or a Court to detain any prisoner without accusation of the knowledge of the Government for any length of time. There was no appeal from the decisions of the Criminal Court but a High Court of Appeal divided into two Halls, was instituted to hear appeals from the Commercial and Civil Courts. The first Hall, consisting of the President, of the Civil Judge and of five Consuls of the Commercial Court, unconnected with the cause in the first instance, took cognisance in the first instance, took cognisance of all appeals from the Commercial Court whilst the Second Hall and on of the Criminal Judges by rotation, took cognisance of all appeals from the Civil Court. The Supreme Council of Justice mentioned earlier took appeals in cases of evident injustice and hardship. It would seem that this Supreme Council of Justice gives the Governor, being the head of the executive and the only legislative authority in Malta, the right to interfere in the sentences of the Courts, thus contrary to the principles of the then constitution. ...read more.

A further proclamation12 upheld that only immovable property was to be bound by hypothec, and a Court judgment shall confer to the creditor the right of hypothec upon the immovables of the debtor, from the date of registration. Mortmain Law : Acquisition of property by the Church and other Pious Institutions would have the effect of withdrawing disposable land, and Proclamation 23 of 1822 laid down that no lands or tenements were to be acquired by such institutions except and under the express and positive condition that they be sold or disposed of within one year, in default these fall ipso facto under government control. Sanctuary : In order to remedy certain abuses in the exercise of the right to sanctuary, Proclamation 7 of 1817 laid down that a warrant of arrest could be lawfully executed at any hour, day or night, against any person, who after having taken refuge in the precincts of any church or similar structure, was found beyond the limits of such precinct, except on a Sunday or Holiday of precetto intero. Appeals to the Privy Council: Proclamation 30 of 1822 paved the way for the securing of the right to appeal to all His Majesty's subjects and other individuals resident in Malta, and without any limitations13, which right was granted after 1823. Sir Thomas Maitland died on the seventeenth of January 1824, seized by a fit of apoplexy at the house of his friend Mr. Le Mesurier, at Floriana. On the twenty first of the month he was laid to rest at the Upper Barracca, solemnified by a simple cross which covers the mortal remains of a man who whatever his faults did much for the legislative and social improvement of the Maltese Islands. ...read more.