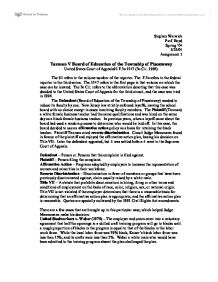 Defendant - Person or Persons that the complaint is filed against. Plaintiff - Person filing the complaint. Affirmative Action - Programs adopted by employers to increase the representation of women and minorities in their workforce. Reverse Discrimination - Discrimination in favor of members or groups that have been previously discriminated against; claim usually raised by a white male. Title VII - A statute that prohibits discrimination in hiring, firing or other terms and conditions of employment on the basis of race, color, religion, sex, or national origin. Title VII is not violated if the employer determines that there is a reasonable basis for determining that an affirmative action plan is appropriate, and the affirmative action plan is reasonable. ...read more.

To be valid, such plans must not unnecessarily trammel the rights of white, should be temporary in nature, and should be customized to solve the past proven pattern of discrimination. Johnson v. Transportation Agency (1987) - County affirmative action plan authorized agency to consider applicants sex as a relevant factor when making promotion decisions for job classifications in which women have traditionally been underrepresented. Outcome - The court held that the plan represented a moderate, flexible case-by-case approach to gradually effecting an improvement of the representation of women and minorities in traditionally underrepresented positions. Court emphasized that the agency has identified a conspicuous imbalance in representation; that no slots were set aside for women or minorities, and no quotas were established. Race or sex could just be one of the several factors considered. ...read more.