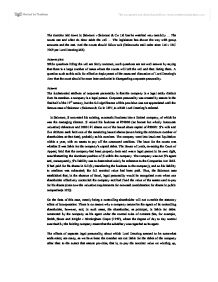 The doctrine laid down in Salomon v Salomon &amp; Co Ltd has be watched very carefully &amp;#133; The courts can and often do draw aside the veil &amp;#133; The legislature has shown the way with group accounts and the rest. And the courts should follow suit.

The doctrine laid down in Salomon v Salomon & Co Ltd has be watched very carefully ... The courts can and often do draw aside the veil ... The legislature has shown the way with group accounts and the rest. And the courts should follow suit (littlewoods mail order store Ltd v IRC 1969 per Lord Denning MR) Answer plan While questions lifting the veil are fairly common, such questions are not well answer by saying that there is a large number of cases where the courts will left the veil and then listing them. A question such as this calls for effective deployment of the cases and discussion of Lord Denning's view that the court should be more interventionist in disregarding corporate personality. Answer The fundamental attribute of corporate personality is that the company is a legal entity distinct from its member- a company is a legal person. Corporate personality was created by statute in the first half of the 19th century, but the full significance of this provision was not appreciated until the famous case of Salomon v Salomon & Co in 1897, to which Lord Denning's referred. In Salomon, S converted his existing, successful business into a limited company, of which he was the managing director. S valued his business at #39000 (an honest but wholly inaccurate valuation) debenture and 20001 #1 shares out of the issued share capital of #20007. S's wife and five children each held one of the remaining issued shares (seven being the minimum number of shareholders at that date), probably as his nominee. ...read more.

There a number of minor provisions. For example, s 24 makes a person makes is a shareholder, after a six month period in which the company has had less than two shareholders, jointly and severally liable for the company's debts. Section 349(4) imposes liability upon an officer of the company who has signed company cheques, etc, on which the name of the company does not appear in full. However, the most important provisions are those relating to fraudulent or wrongful trading and the special rules for groups of companies. Sections 213 and 215 of the Insolvency Act 1989 impose liability for the debts of a company where a person has engaged in fraudulent or wrongful trading. The rules on group accounts are immensely complicated; broadly, they are design to ensure that the accounts of associated companies are looked at as a whole to provide a 'true and fair view'. What can we discern as the concern of parliament in providing exception to Salomon's case? It is clear that an element of wrongdoing or impropriety should disqualify a person from the manifold benefits of corporate personality (particularly that of limited liability) and the courts have been reluctant to follow this lead. Such cases seem currently to be called cases changes with the years. The veil has been lifted to prevent a person escaping specific performance of a contract by selling the contracted land to a company which he controlled (Jones v lipman 1962), ant to prevent a person from evading the effect of a valid restraint clause (Gilford Motor Co Led v Horne 1933). ...read more.

Consequently, the house of lords was able, on the facts, to distinguish DHN, where had been a complete coincidence of shareholding. Nevertheless, the House went further and doubted the correctness of DHN other than as an interpretation of the particular statute authorizing compensation. Thus, whatever the merits of the economic reality approach, it seems unlikely to find favour in British courts in the near future. That strict adherence to the legal structures can cause unfairness to shareholders has been recognize and ameliorated by the courts in the case of the winding up of quasi-partnership companies (Ebrahimi v Westbourne Galleries Ltd 1970) and in the interpretation of unfair prejudice in the context of s 459. Such strict adherence may cause loss to creditors (as when a company abandons its insolvent subsidiary) and, as yet, this position has not been ameliorated by the courts (see the somewhat caustic comment on this by Templeman LJ in Re Southard & Co Ltd 1979). However, such reforms are probably best left to parliament- the potential imposition of liability for wrongful trading upon a shadow director may prove a more effective means of controlling the use of high risk subsidiaries than the possibility of subsequently lifting the veil. If parliament does not intervene, we may find that the implementation of amended Ninth Directive requires the recognition of economic reality, regardless of the primacy of the principle of separate legal personality. Could illustrate the strength of the Salomon case by referring to other illustrative cases, for example, Lee v Lee Air Farming Ltd 1961, and give the facts of some of the 'lifting the veil' case. Greater discussion of wrongful trading could be useful. ...read more.