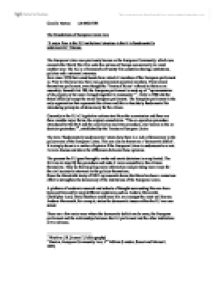 The EU is 'fundamentally undemocratic', discuss.

The Foundations of European Union Law 'A major flaw in the EU institutional structure is that it is fundamentally undemocratic' Discuss. The European Union was previously known as the European Community, which was created after World War II to unite the nations of Europe economically to avoid another way. The EU is a framework of twenty-five countries sharing; institutions, policies and a universal currency. Ever since 1979 their constituents have voted all members of the European parliament in. Prior to this however, their own governments selected members. They named themselves parliament, even though the 'Treaty of Rome' referred to them as an assembly. Beneath Art 189, the European parliament is made up of "representatives of the peoples of the states brought together in community" 1. Only in 1986 did the states officially accept the name European parliament. The European parliament is the only organisation that represents the citizen and this is absolutely fundamental for introducing principles of democracy for the citizen. Currently in the EU all legislative actions start from the commission and there are three months major forms, the original consultation. "The co-operation procedure introduced by the SEA and the conciliation and veto procedure, also known as the co-decision procedure."2, established by the Treaty on European Union The term 'fundamentally undemocratic' states how there is a lack of democracy in the policy areas of the European Union. This can also be known as a 'democratic deficit'. It is simply down to a matter of opinion if the European Union is undemocratic or not. ...read more.

The legislative processes are very complex, this means that it is nearly impossible for even specialists to understand, the public would be unable. Also, most of the decision-making processes take place behind closed doors. Even the election process of the EU can be perceived as undemocratic, the party 'list' method caused controversy and there is a strong argument that the system is largely undemocratic. The choice of candidates for the list is done by the party hierarchy, the same people also choose the order in which they appear on the ballot, these factors could effect the chances of the candidates being elected or not. The research I have made whilst studying the EU institutions (specifically the study of the democracy of the EU) shows that most authors who discuss this matter are in agreement that the main problem of the democratic situation is that the main problem of the democratic situation is that the 'European parliament has not got wide-range rights to control the common institutions (the council and the commission)'. For development reasons the national governments are needed to make all the wider field of decision-making. The national government need to finalise on decisions by importance of national interests and the citizens' interests. E.g. Terrorism or natural disaster. These democratic issues means that, between the EU and the European citizens, the citizens do not know why they need the European Union, or why they are members of the Union, they feel as if the EU is too distant from them6. ...read more.

Perhaps the Parliament could be given a greater opportunity not only to propose but also to enact legislation. To achieve this there will have to be a greater affinity between the European Community as an institution and its citizens as MEPs can hardly be described as currently acting upon a democratic mandate when electoral turnout is so low. This could steadily be achieved over time or it could be accelerated with a 'Bill of Rights' or constitution. It is, however, worth stating that although there is a 'democratic deficit' in the EC's legal system, it has come a long way in a short time. At the same time, structural changes could reduce the democratic problems until the mandate of the European Parliament gains greater legitimacy through larger turnouts at European elections. It could also be reduced by opening up the decision making process and by maintaining the powers of the intergovernmental institutions, mainly the Council of Ministers. The Council of Ministers is accountable to the European citizens and is best placed to protect their interests. Until the European Unions Identity can be achieved along with the greater support for a more powerful and closer union, the autonomy of the supranational institutions should be kept to a minimum. Bibliography Schmidt. Vivien. "Democracy in Europe: The EU and National Polities" 2006. First Edition. Oxford University Press Siedentop. Larry. "Democracy in Europe" 2001. Penguin Group. Connor, Tim. Lecture Notes and Course workbook 2007-2008 www.europarl.co.uk Chryssochoou, D "EU Democracy and the Democratic Deficit" 2003. Oxford University Press. www.bbc.co.uk www.thetimes.co.uk 1 Westlaw. ...read more.